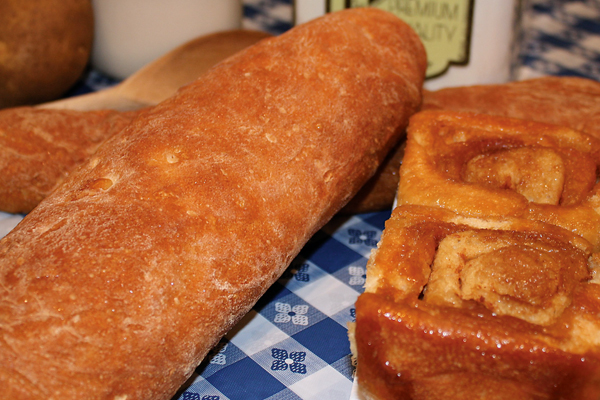 “I made a splendid batch of bread the day we came…. Besides the bother of making bread so often, we have to make the yeast here about once a week. It’s made of potatoes, hops, salt and sugar. One cupful of old yeast is put into it to start the new batch, which is then put away to rise in a large stone jar in a cool place.”

Those were the words of Ethel Hertslet, an Englishwoman who arrived in Lake County, California, in 1885, who was learning how to make bread with sourdough.

Sourdough, like so many other goods, was created because of a need. Yeast cakes weren’t always available, so pioneers created their own liquid yeast.  They used potatoes, potato water, hops,  salt, sugar, water or flour, or a combination of those ingredients, to create perpetual or wild yeast. All they had to do was to save a little from the original “starter” and refresh it with each use. They didn’t call it sourdough back then; it was simply yeast to them.

While sourdough today is associated with Californians, it’s not their invention—it’s been around since Egyptian times. Emigrants and Forty-Niners are the ones who made sourdough famous in California.

Isidore Boudin, a French immigrant to San Francisco, took sourdough bread to a whole new level. In his bakery in the city, he fermented his dough with wild yeast and formed it into the shape of a traditional French loaf. The air, water and flour from a particular area makes all the difference in the yeast.

The word “sourdough” wasn’t used to describe bread until around the turn of the 20th century. By the 1898 Yukon gold rush, the term referred to Alaska or Yukon prospectors or pioneers. Back in the day, it was expressed as two words; now it’s a one-word descriptor.

During naturalist John Muir’s five years studying California’s Yosemite Valley, he supervised a San Joaquin sheep owner’s flock in 1869. While in the Sierras, he encountered sourdough bread. He described it in his writings: “Sheep-camp bread, like most California camp bread, is baked in Dutch ovens…. The greater part, however, is fermented with sour dough, a handful from each batch being saved and put away in the mouth of the flour sack to inoculate the next.”

Begin your own historical baking journey with this 1877 sourdough starter recipe!

Allow to sit for seven days, stirring each morning. You’ll see small bubbles on the top when it’s ready. Place into a container with a lid, and poke a hole in the lid so the yeast can breathe. Place in the refrigerator. It will separate; just stir it before using.

Recipes begin with a fresh starter, so place one cup of your mother starter with one cup warm water and a cup of flour in a non-metal bowl. Allow it to sit overnight at room temperature, covered loosely. The next day, stir it down, measure out the amount of fresh starter needed for your recipe and return the remainder to the storage container, stirring it in well (this “feeds” your mother starter). You must feed it at least once a month, or it will die.

In a large bowl, combine the water, sourdough starter and four cups of flour.

Mix well and cover, then put in a warm place overnight.

The next day stir in the salt and sugar and add one cup of flour at a time, so as to make a stiff dough. Knead the dough until smooth. Cover and let the dough rise for 2  hours.

Punch down dough and divide it in half. Knead until smooth, then form the dough into rounds. Place on a greased baking sheet and let rise until it is double and puffy for about  one to two hours. While this is rising, mix the water and cornstarch in a small bowl and bring to a boil.

Heat oven to 400°F. Carefully place a small pan of hot water on the bottom rack of the oven. Cut two slashes across each other on top of each loaf. Bake for 10 minutes.

Baste each loaf well with cornstarch mixture, then bake for another 20-25 minutes. You will know the loaves are ready when they turn a light golden color and sound hollow when tapped on the bottom.

Cool for two hours to get that full sourdough flavor, and then enjoy!