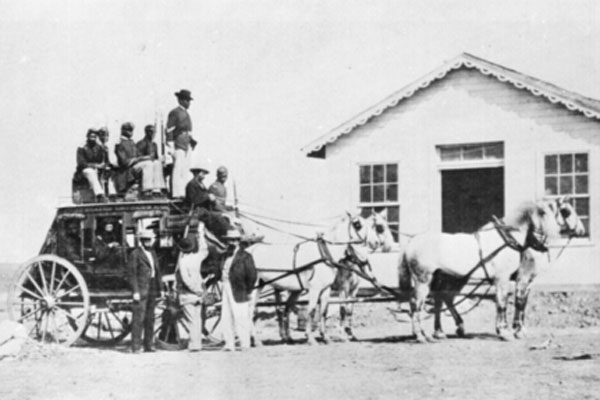 Stagecoach Stations on the old Butterfield Overland Mail that ran from Tipton, Missouri to San Francisco between 1858 and 1861 left a lot to be desired. Passengers were appalled by the dirt and squalor that greeted them at the station. Built of adobe with floors “much like the ground outside” one wrote, “except not so clean” and interiors black with flies, there was little to attract the discriminating passenger.

Meals were worse: tough beef or pork fried in a grime-blackened skillet, coarse bread, mesquite beans, a mysterious concoction known as “slumgullion,” lethally black coffee, and a “nasty compound of dried apples” that masqueraded under the name of apple pie.

This went on day after day. The story was told of the station master who set a plate of fat pork before a traveler who said, “Thank you, but I can’t eat it.”

“Very well,” was the reply, “jest help yourself to the mustard.”

Many stagecoach relay stations had toothbrushes hanging on strings for the passengers.  “All for one and one for all.”