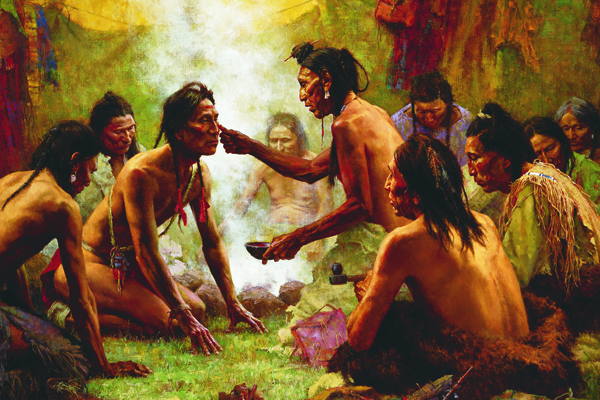 Howard Terpning was in his 50s before becoming affectionately known as the “storyteller of the Native American,” an honor he holds close to his heart.

“His is a special collection with the strength of the ancients’ writing [sinaxin] on the stone,” said Darrell R. Kipp Apinokio Peta from the Blackfoot Reservation in Browning, Montana.

Upon moving to Tucson, Arizona, once the heart of Apache country, then 49-year-old Terpning immersed himself in the study of Native American history. After 25 years illustrating publications such as McCall’s and Time, and creating over 80 posters for movies such as The Sound of Music and Dr. Zhivago, Terpning finally gave in to his affection for the West. Many of his canvases became enlivened with scenes depicting the Plains Indians’ rhythms of community life.

“When I look at these pictures I can feel the life coming out of them,” said Michael Blake, author of Dances With Wolves. “Sometimes I too am in the picture and find myself holding my breath, wondering what will happen next.”

From everyday dress to ceremonies, Terpning’s attention to historical detail is what elicits such strong emotions from the viewer. Earlier examples of Terpning’s heightened empathy with distressed people are found in six paintings from his 1967 tour as a Marine Corps civilian combat artist in Vietnam (now displayed in the Marine Corps Museum in Washington, D.C.).

The first recipient of the Hubbard Art Award for Excellence, Terpning has also won countless gold and silver medals from the Cowboy Artists of America. In addition, he was twice awarded the National Academy of Western Art’s Prix de West, has earned the Lifetime Achievement Award from the Gene Autry Museum and was recently bestowed the Eiteljorg Award for Excellence in American Western Art. His 1992 book, The Art of Howard Terpning, won the Outstanding Art Book award from the National Cowboy Hall
of Fame.

The Trophy and Offerings of the Little People are among Terpning’s paintings hanging in permanent collections at major institutions, such as the Gilcrease Museum, the National Cowboy Hall of Fame and the Phoenix Art Museum.

Some dust is sure to collect behind those hefty frames, according to a prediction made by the late Fred A. Myers, former director of the Gilcrease Museum in Tulsa, Oklahoma, who said that Terpning (now 76) joined a small membership “of painters of the West in the late twentieth century whose art will still be hanging in museums and appreciated a hundred years from now.”