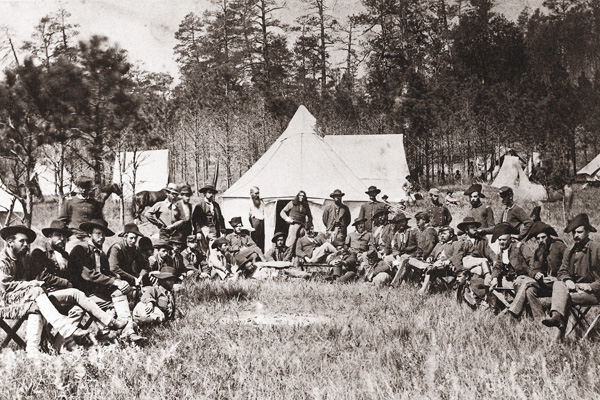 How were Custer’s troopers at the Little Big Horn clothed and equipped? This may be a minor point to many, but an accurate accounting of the Seventh Cavalry’s uniforming in 1876 is essential to evaluating eyewitness accounts and in trying to reconstruct the events of that most dramatic of battles on the Western plains.

Many accounts by the Sioux, Cheyenne and Arapaho warriors who fought at the Little Big Horn tell of a dying officer in a buckskin coat that most assume must be the colorful and controversial George Custer. One specific Cheyenne oral history tells of this officer in buckskins being shot at the Medicine Tail Coulee river crossing. Some well-meaning scholars have assumed that officer was the Seventh Cavalry’s commander Lt. Colonel George Custer. The flamboyant former Civil War hero certainly had a buckskin jacket with him that day, as did at least seven other officers who died with his five companies of cavalry on the Greasy Grass Ridge, including his brother Captain Tom Custer, Captain Myles Keogh, commander of I Company, and the regimental adjutant First Lieutenant W.W. Cooke.

The problem in trying to identify Custer’s whereabouts and actions through his buckskin clothing becomes more than a minor academic exercise in sartorial minutia when one realizes that Trumpeter Giovini Martini, the last surviving man to see him alive, testified at the Reno Court of Inquiry that Custer had taken off his jacket and tied it to his saddle pack. Thus leaving Custer sporting a privately made blue double-breasted bib, or fireman’s shirt, trimmed in yellow cloth tape with crossed sabers and a “7” embroidered on the points of the collar. A style of shirt that most of the other officers of the regiment also sported. Contrasting binding tape was often added around the collars, front plackets or double-breasted bibs on civilian shirts of the time, and many Army officers emulated the same style as well. Photos of officers, 1870s cowboys and even Indian Scouts and Reservation Police reveal just how common the flashy style of trimmed pull over shirt had become in the West.

With these fancy-looking shirts, Custer and many of his officers also wore long cravat-style ties, not unlike the one he wore as a colorfully-dressed general officer during the Civil War. Again this was a style common to the civilian populace, as well. All of this making Lt. Colonel Custer quite undistinguishable from many, if not most, of his fellow officers. So it now becomes quite doubtful that Custer was the buckskin clad officer shot at the river ford that day.

“The day was warm and few had on any kind of blouse,” emphasized former Seventh Cavalry captain Edward S. Godfrey in 1896. Blouse was the Victorian-era description for outer garment, many would later call a coat. Godfrey did recall finding First Lieutenant James Porter’s buckskin blouse in the deserted Indian village several days later, “from the shot holes in it he must have had it on and must have been shot from the rear, left side, the bullet coming out on the left breast near the heart.”

During Victorian times no officer would have dared bandy about his troops dressed down to an undershirt. Such a social transgression would have been the equivalent of an officer in World War II stripping down to his bare torso in front his command. But given the heat, Porter might well have worn the buckskin as an outer shirt over his undershirt.  A light weight and unfringed, pull-over, brain tan buckskin shirt that belonged to an officer of the Seventh Cavalry during the 1877 Nez Perce campaign is now in the collection of the Army of the West Museum at Fort Leavenworth, Kansas.

Despite Hollywood in-vention, there are no reported instances of any officer ever sewing their shoulder straps denoting rank onto their buckskin coats. Indeed, on campaign many officers didn’t bother to have the expensive shoulder boards sewn on their regulation blouses worn in the field. Artists and filmmakers have a penchant for portraying Custer as the most colorful 1870’s army officer on the plains. But many other officers of the period, including Captain Charles King of the Fifth Cavalry and Engineering Captain William Ludlow, actually sported colorfully floral beaded buckskin outfits that they wore on campaign. These beaded outfits were usually made by the wives of the eastern plains’ Indian Scouts, like the Arikaras that served with the army on various campaigns.

Western historical films on the Little Big Horn have seldom gotten it right. Custer is always the lone buckskin clad officer amongst spit-and-polish-looking troopers who usually resemble vintage Spanish-American War troopers in tan hats and blue pullover shirts. Only 1970‘s Little Big Man and 1991‘s Son of the Morning Star made some sort of serious attempt at getting the overall non-uniform look of Seventh Cavalry at the battle partially right, with Morning Star coming closest to an authentic representation. Even then, Custer was still shown as the lone buckskin-clad dandy to dramatically single out his individualistic ego.

Son of the Morning Star’s director, Mike Robe, had a certain image of Custer he wanted to reinforce as “A rock star of his era.” Also emphasizing that Custer, “judging from his outlandish clothes, spent a lot of time in front of the mirror.” Yet that mini-series marks the most serious attempt ever recorded on film, to show how Custer and the Seventh Cavalry looked that fateful day.

Almost all of the Seventh Cavalry officers and enlisted men on the campaign were dressed for comfort, not the parade ground. Civilian hats, shirts and accoutrements were evident, if not prevalent, through out the ranks. Straw hats were particularly popular during the summer months because they were cooler then felt under the hot summer sun, though they wore out much more quickly then a felt hat. Major Marcus Reno, as well as a number of other officers and troopers, reportedly purchased straw hats earlier in the campaign from a sutler aboard the steamer Far West for 50 cents each. Light-colored, civilian-style felt hats were also quite often privately purchased because they reflected the sun’s solar heat. In 1874 the early mail-order firm of Montgomery Ward sold one inexpensive wide-brimmed and low-crowned felt hat curiously referred to as the “Panama felt.”

First Sergeant John Ryan of M Company described the Seventh Cavalry leaving Fort Abraham Lincoln on May 17, 1876.  “All the companies wore broad brimmed slouch hats, some black and others gray.” Photos of the time show many of the civilian hats worn by the army on the 1870s plains to be moderately-brimmed affairs.

Custer, his brother Tom and several others wore quality, wide-brimmed, light gray felt hats similar to a straw plantation hat. Custer’s hat hooked up on the side in rather dapper fashion like those worn by some of the irregular British officers then starting to campaign against African natives on that continent. George and Tom Custer, as well as several other officers, can be seen picnicking in such hats in an 1875 photo.

Contrary to their popularity with modern cavalry reenactors, the floppy and poorly made black folding campaign hat introduced in 1872 was universally despised by common troopers because of it’s ungainliness and poor-quality construction. Though several officers in the Seventh Cavalry on June 25, 1876, including Custer critic Captain Fred Benteen wore their better quality 1872 officer’s model campaign hats that day. In Custer-themed films only the Son of the Morning Star mini-series has ever depicted that abomination of headgear, perhaps due to the preponderance of reenactors sporting the 1872 hat who worked as skilled extras on the film. Despite the Irish troopers of John Ford’s cavalry films, the kepi, or short leather billed forage cap, offered little protection from the summer sun, though a few do show up in photos of General Crook’s men during the 1876 campaign.

Outer shirts worn by enlisted men of the Seventh Cavalry in 1876, as opposed to undershirts, always raise a interesting question for artist and filmmakers alike. During the Spanish American War in 1898, troops were finally authorized to go about in only their blue pullover shirts officially, yet during the Indian Wars it was also common practice, though an 1870’s trooper might well be wearing a hickory-checked shirt, in a small black and white, or red and black checkered pattern. Other civilian shirts in calico or stripes might also have been worn as well as the (then) army issue gray flannel shirt, white shirts held over from the Civil War and even a few blue pull over shirts then being issued in small numbers as an experiment. But despite film representations, non-commissioned officer’s chevrons and officer’s shoulder straps were not sewn on those new blue shirts until the Spanish-American War in 1898, even then the practice stayed unofficial for a time.

Again, because of the late June heat, most if not all of the enlisted men had probably shucked their regulation yellow-trimmed 1874 coats, tying them to their saddle packs, though at least some officers chose to wear the 1872 black braid trimmed officer’s coat that was strongly similar to the British officer’s patrol jacket of the same period.

Bandanas, of any type or color weren’t in use until well into the 1880s. Scarves were more often used as a tie, or cravat, knotted under the shirt collar, and show up in numerous photos of troopers and officers of the time.

Most of the troopers re-enforced the seats of their sky blue wool trousers with white canvas or buckskin.  This extended the wear of the pants several fold and made bouncing in the saddle for hours at a time more bearable. It was a practice that went back at least to early nineteenth-century Europe were even many of Napoleon’s most ornately clad cavalry would wear colorful trousers or overalls reinforced through the seat and legs with black leather. Certainly, some enlisted men and officers chose to privately purchase sturdy canvas or corduroy pants themselves. Godfrey reported that Second Lieutenant Harry Harrington, who died with Custer, was wearing a pair of white canvas trousers with leather fringe sewn into the outer seam. Lt. Colonel Custer, Thomas Custer and perhaps adjutant Cooke all wore buckskin trousers on their last campaign.

Braces or suspenders of private purchase in an array of colors might also have been worn exposed, but appear to be the exception. The U.S. Army did not begin to issue uniform style and color braces until 1883.

The white or buff leather gauntlets so often seen in films were a privately purchased, non-regulation item, of which many did not afford themselves. Of those that did feel the need for some sort of gloves, these often might have been of the floral-beaded buckskin variety, and perhaps even fringed.

Many officers at the Little Big Horn also took another European style to heart making good use of knee high canvas leggings that buckled or buttoned up the side. A number of officers in the Seventh wore such leggings over short Wellington-style boots. These leggings were popular with British officers in Africa and later even Mexican Rurales police south of the border. It is a mode of frontier army style yet to make its way onto movie screens depicting Custer’s men. Except for representations of Custer, American filmmakers most often like to keep their Western Army depictions familiar, instead of unique.

So here is Custer’s Seventh Cavalry at the Little Big Horn in all of their non-regulation “splendor.” Some, mainly officers, unconsciously colorful, or knowingly aping their buckskin clad commander. Others looking like scratch farmers heading to market, while most falling into a sort of comfortable compromise between serviceable style and durable economy. But by the end of a hard, long summer’s campaign, all might look like bearded beggars and paupers. Artists and film makers would, of course, give us a far more polished and romantic image of the man who fought that fateful battle forever known as Custer’s Last Stand.

DAN GAGLIASSO is a film historian and screenwriter. His history of Custer films is forthcoming from the University of Nebraska Press.