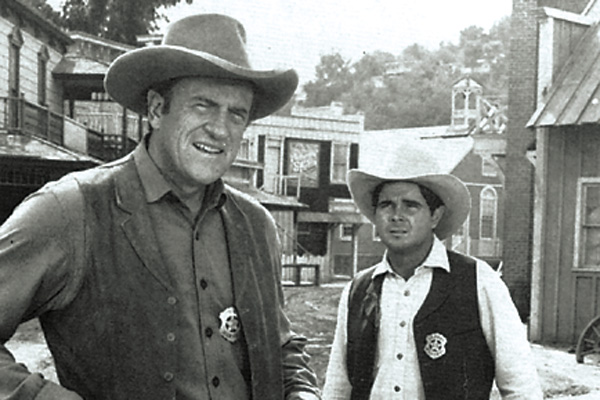 Texas Ranger—a man’s man and a woman’s hero—men whose grit was their glamour. The lawmen who wore the Lone Star badge would never have guessed they’d be so admired that 100 years later, men the world-over would emulate their style. Here, assembled exclusively for True West’s camera is a stellar cast of the most believable “Badgers,” outfitted for duty (or dinner) by Tombstone Outfitters and Old Frontier Clothing. Each article of clothing is authentic down to the weave.

Complete with gunleather, courtesy G.D’Ambrose Custom Saddles, and period weaponry, this capable cast may not be stealing over the border to secure the homeland, but they certainly steal the scene. Headgear courtesy of Bronco Sue.

Discovered while pumping gas on the Sunset Strip, Peter Brown parlayed his chance encounter with Jack Warner (the last of the Warner Brothers) into a screen test and the modest film, Darby Rangers (1958). Peter gained fame as the youthful Johnny McKay in the hit series Lawman. The show debuted on his 23rd birthday, October 5, 1958, and ran four seasons. Peter will receive the Golden Boot Award on August 10, 2002 in Hollywood.

Buck Taylor has had a long career in Westerns, starting with the hit TV series Gunsmoke, where he played gunsmith Newly O’ Brien (1967-75). One of the best horseman in Hollywood, Taylor has used his skill in Tombstone, Gettysburg and Conagher. Also a painter, Taylor is the official poster artist for the Fort Worth Stock Show. Look for him in the upcoming Civil War epic Gods and Generals.

Mike Moroff was born and raised in El Paso, Texas, and has acted in over 40 films, the first 17 of which were filmed in Mexico. He has appeared in a wide range of roles, including parts in La Bamba, Robocop and Desperado. His favorite role was playing Pancho Villa in TV’s Young Indiana Jones Chronicles produced by George Lucas. Mike is a team-roper and has won 13 buckles on the Pro-Celebrity Circuit. His next film is Diablo.

Although actor Alex Cord is probably best known for his role as Archangel on Airwolf (1984-86), he has starred in several Westerns, including the reprise of the Ringo Kid in Stagecoach (1966). Alex has a book being published this year titled A Feather in the Rain, which may be made into a movie.

Where: Festival of the West, Scottsdale, AZ