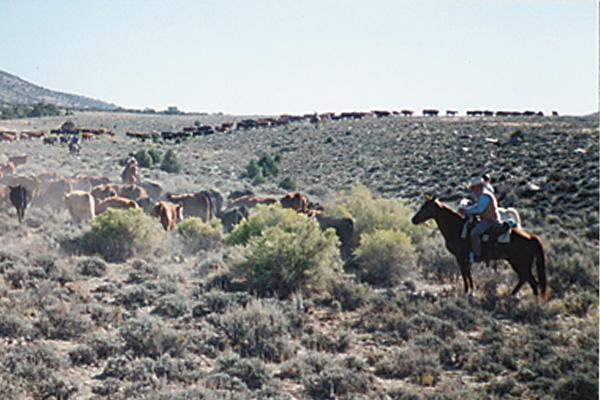 So, if you choose to make this 287-mile historical adventure across the state (which, by the way, offers a view of the most beautiful mountain ranges in the USA) paralleling the Pony Express trail, here is what you will experience.

But before you start—keeping “survival” in mind—have your car engine tuned, tires checked, have a full tank of gas (fill it every chance you get) and always keep a couple of quarts of drinking water with you at all times.

Let’s start with the old “Iron Horse.” Back in the 1930s and 40s, Hollywood studios purchased a great number of railroad rolling stock, much of it coming from the old Virginia & Truckee (V&T) railroad. When Hollywood decided to stop producing Westerns in the 1970s (which, of course, included the good old railroad trains), they put up their stock for sale. The state of Nevada jumped in and bought enough of it that the curator of the present museum says, “It will take several lifetimes to restore all this.” In 1990, the State opened their Nevada State Railroad Museum, located just south of the state capitol in Carson City, on Highway 395, at the corner of Fairview Avenue. Phone: (775) 687-6953.

After your visit to the railroad museum, along the way, travel to Highway 50 and head east. Your first stop will be Fallon, the last town where you might actually find a Wal-Mart. Fallon did not exist around 1900. There was a dusty crossroad where Mike Fallon had his ranch house and Jim Richards had a small store. Local Native Americans called the spot “Jim’s Town.” Fallon experienced an “oil boom” in 1924 (back when hotel rooms were going for $1 to $2 per week). They drilled 14 wells, but not one gallon of oil was produced.

Allow three to four hours to visit this free (all museums in Nevada are free) 14,000-square-foot exhibition of the late 1800s Western culture. Some displays are Paiute Indian artifacts and tools, a furnished bedroom and kitchen of the 1860s, cameras, safes, guns and even quilts. Outside, exhibits include horse-drawn farm machinery, steam tractors and remnants discarded by emigrants who crossed the “Forty-Mile Desert” during the gold rush. If you are into cave spelunking, call in advance for a tour of the Hidden Cave, 10 miles east of Fallon. This is a 21,000-year-old archaeological find. The tour is free. Phone (775) 423-3677. Tours are held the second and fourth Saturdays of the month.

The Fallon area has a history of failed agricultural ventures including raising sugar beets (killed by an infestation of “curly crop”) and cantaloupes (killed by competition from California’s Imperial Valley and droughts in 1931 and 1932). Agricultural success finally came with growing alfalfa. Today’s 30,000 acres produce about five tons of alfalfa per acre.

Part of this failure can be attributed to a water problem in the early years. A reclamation project began around 1903 to bring water from Lake Tahoe and Carson River, which proved inadequate. The construction of the Lake Lahonton dam in 1915 enabled the Lahonton Valley to become known as the “King of the Cantaloupe” for around 15 years. Today, it also serves as a State Park with excellent camping facilities, outdoor programs, watersports and fishing.

On May 8, 1860, James Williams returned to Williams’ Station, an outpost where he sold food, whiskey and supplies to emigrants crossing the Forty-Mile Desert. Upon arrival he found his two brothers and an employee dead, and the station burned to the ground.

Three Paiutes claimed to a historian named Myron Angel that they were among the nine who attacked the station to retaliate for William’s capture of Paiute women. By the time the Pony Express spread the news to Virginia City, the numbers had increased from 3 to 19 murdered by a tribe of 500 Paiutes. This was why they constructed Fort Churchill,—a project that began in July 1860. The fort was to protect immigrants and local settlers from Paiute attacks, guard the Pony Express and telegraph lines, quell prison troubles, and intervene in miner’s disputes. Fort Churchill had a short life, for it experienced little action. The military left on September 17, 1869. The buildings were sold to Samuel Bucklands on March 17, 1870 for $750. The fort, near Lake Lahonton on Highway 95, is now a State Park with museum, self-guided tours, camping and picnic areas.

Over 8,000 years ago,  tribes of Native Americans camped 10 miles east of Fallon at what is now Grimes Point. They chiseled their  art and writing (petrographs) on large rocks. A walking trail and interpretative brochure takes you past eight of these archaeological wonders. This is also the location of the Hidden Cave tour, if you signed up for it at the Churchill County Museum in Fallon. Be sure to sign up—you can’t do this without a guide.

On up the road a bit are two historical attractions—Sand Mountain and Sand Springs Station. Sand Mountain is literally a 600-foot high mountain of trapped sand that is changed almost daily by the gusty winds. At the site is a 40-acre, fenced-off desert study area with a one-mile interpretive loop that passes by an 1860 Pony Express Station, rediscovered in 1977. Sir Richard Burton, British scholar, visited the station on October 17, 1860 and wrote:

“The water near this vile hole was thick and stale with sulphury salts: it blistered even the hands. The Station house was no unfit object to the scene, roofless and chairless, filthy and squalid, with a smoky fire in one corner, and a table in the centre of an impure floor, the walls open to every wind and the interior full of dust.”

As you walk through the remains, you’ll likely agree with Burton’s observations. Pony Express station masters had to swear not to drink, but the most commonly found “artifacts” by the 1977 archeologists were liquor bottles—and no wonder!

As you venture east, turn south at Middleton on Highway 361 and drive 50 miles (we encountered only one pickup driving on this entire stretch) to the former mining town of Berlin, at 7,000 feet . Today, it’s a state park and site of a well-preserved ghost town. Better still, you’ll see the remains of 225 million-year-old sea serpents, some around 60-feet long, that weighed around 60 tons, and once swam Nevada’s Great Basin.

Ranger tours of the mine, mine town, Ichthyosaur Fossil Shelter and enclosed viewing area are given daily. They have self-guided walking tours, camping and picnicking. Phone: (775) 964-2440.

Austin became a boni fide boom town when a retired Pony Express rider found silver in a nearby canyon which produced $50 million. Fire and building wood in Nevada was scarce, so Virginia City’s International Hotel was dismantled and every board transported across the desert to be reconstructed in downtown Austin. Today, Austin is a sleepy hamlet of 300 population with some fine antique shops, historic buildings built during the gold rush years and three churches with magnificant steeples.

As you leave town, look for the bike rental shop. You can rent a mountain bike and peddle trails like Cahill Canyon, Emigrant Pass/Pony Express Loop, Gold Venture Loop or Crest Cut-off.

This is also a good place to stop for lunch.

Just a short drive out of Austin is the former project of a rich miner who built this to be a summer home for his kids. It was modeled after one he saw in Italy. His kids used it for one summer and abandoned it.

Spend the day in this well-preserved 1860s gold rush town which once supported 100 saloons, several dozen gambling houses, theaters, numerous churches and hotels and five fire companies. Today’s population numbers 1,100. Pick up a copy of the Self Guiding Tour of Eureka at the Sentinel Museum, former home of the Sentinel Newspaper, which kept tabs on this western town for 100 years. It takes you by 47 historical sites and relates vignettes about each attraction.

As you walk through, one of the most impressive sites you’ll come arcoss will be the Eureka Opera House. View the stage, balconies and ceiling; imagine what it was like for men and women in the wild and woolly days of the 1860s to prepare for and come to such elegance in horse-drawn, state-of-the-art carriages.

The major attraction here is the Nevada Northern Railway Museum. One day in 1982, workers at the rail yard received notice that there would be a layoff. Since this had happened before, they just laid down their tools, expecting to return soon. Three years later, they received their severance checks.

Kennecott Copper Company donated the yard, engines, machine shops, roundhouse, rolling stock and 32 miles of useable track for use as a museum. Today, 45-minute guided tours take you through one of the most interesting railroad facilities in the state. During the summertime, you can take a 14-mile, 90-minute “Ghost Train” ride. Included is a tour through the 1910 Baldwin steam engine cab. For information, call: (755) 289-2085. A good place to stay, if you’re not camping, is the Copper Queen.

Leaving Ely and driving south on US 93/50/6 a sign points the way to the Ward Charcoal Ovens. Thomas Ward discovered a deposit of lead-silver-copper ore here in 1872, and a San Francisco company began to dig. A supply of charcoal was needed for the ore smelting process, so a master mason was commissioned to build ovens to make the charcoal.

Six ovens, 30 feet high and 25 feet in diameter were built and are in as good condition today as they were when they were used. Only $250,000 in silver was reportedly earned and the mining operation closed in 1875.

This is the gold at the end of the rainbow. While driving here from Ely, you’ll pass Cave Lake State Park—excellent for camping, fishing and hiking, and viewing elk roaming about in the spring and fall months.

The hub of the park is the visitor’s center, located at 8,000 feet. In addition to the ranger station, gift shop and cafe, there is a short trail that takes you by the original cabins of the first few that discovered this site.

Don’t get sidetracked though, because the major attraction here is the Lehman Caves. Absalon Lehman discovered these 500 million-year-old caves in 1885 and it’s been a tourist attraction ever since. These days, you take off from the visitor’s center with a ranger  for a half-mile tour into an underground wonderland with a paved trail and very few steps.

A 12-mile drive up to the Wheeler Creek Campground at 10,000 feet brings you to the Bristlecone Pine trailhead, a trail you absolutely must take it you’re at all physically able. Bristlecone Pines are among the oldest trees in the world. One was cut in 1964 to determine its age, which turned out to be 4,900 years old.

Well, this 287-mile trek on the Loneliest Road in America is over—but I’ll bet your thirst for other Nevada historic attractions has yet to be quenched, and your next trip is already in the works.

Don Dachner is a member of Travel Writers of America. He and his wife Jean reside in Dixon, California. This is his first article for True West.