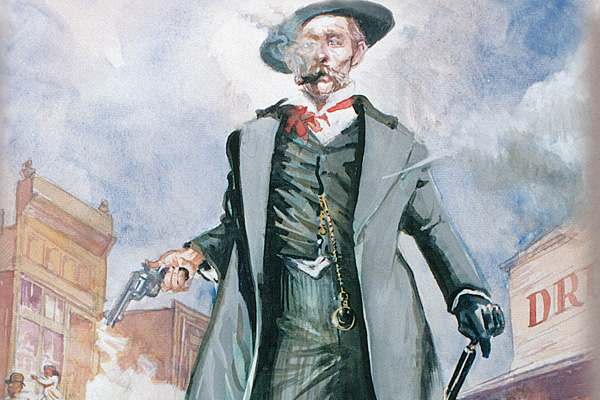 No contemporary newspaper attributed the deed to Holliday. The first mention of Holliday’s involvement wasn’t until July 20, 1881, almost precisely two years after the shooting.

Neither the publisher of the report, Russell A. Kistler, nor his newspaper, the Las Vegas Optic, had first-hand knowledge of the event; both arrived in town several months after the shooting. Kistler’s account is, at best, hearsay. At worst, engaged in a struggle with the Las Vegas Gazette for survival, he fabricated the report to sell newspapers. Kistler had a reputation for sensationalism. For example, he once had reported in the Optic that the skull of Billy the Kid was “boiled and scraped” in Las Vegas, while the body was buried until decomposition would allow for the skeleton to be “hung together by wires and shellac to make it presentable” (September 10, 1881). Pure nonsense.

Kistler also wrote that Doc Holliday had a gin-mill on Centre Street and implied that it was in front of this saloon that Gordon was killed. The details were more explicit in a subsequent Optic article, attributed to Bat Masterson: “He [Doc] opened a saloon and dance hall. One night he had some trouble with Mike Gordon, a tough gambler. Gordon left the saloon saying that he would do Doc up” (reprinted in the Arizona Weekly Citizen, August 14, 1886). Impossible. The saloon did not yet exist. It wasn’t until July 20, the day after Gordon’s death, that Holliday contracted with local carpenter W. G. Ward for the construction of the Holliday saloon on the leased Centre Street site.

Last but not least, Masterson, also a sensationalist, wrote that the day after killing Gordon, Holliday then shot Gordon’s friend and was immediately run out of town. More nonsense. Holliday is known to have remained in Las Vegas until October.

Karen Holliday Tanner is related to Doc Holliday and is the author of Doc Holliday, A Family Portrait (University of Oklahoma Press). An experienced writer, Tanner has written for True West, Wild West, WOLA Journal, and the NOLA Quarterly.

With only limited research material available, it appears impossible today to prove whether or not it was Doc Holliday who killed Mike Gordon in Las Vegas, New Mexico on July 19, 1879. At later dates, however, both the Las Vegas Optic, and Bat Masterson identified Holliday as the killer, and no other candidate has ever surfaced.

Russ Kistler, editor of the Las Vegas Optic, most certainly was in Las Vegas, and not 100 miles away in Otero, when Gordon was killed. Kistler published the Otero Weekly Optic only May and June, 1879, and moved his newspaper operation south to Las Vegas early in July, reportedly on one of the first trains to arrive in that town. The Las Vegas Weekly Optic began publication in July and continued until November 4, 1879. There are no known files of the Weekly Optic.

Whether or not Doc Holliday’s saloon on Centre (now Lincoln) Street, was in existence on the night of the killing is unimportant, as contemporary newspaper accounts of the killing make no mention of any saloon by name.

As for Kistler’s veracity, how do we know that he fabricated the story about Billy the Kid’s body being exhumed and his skeleton wired together? Years later, stories surface that the Kid’s skeleton was in the possession of a pioneer physician in Santa Rosa, New Mexico.

Personally, I believe that the Las Vegas newspaper editor knew what he was talking about, and had no reason to publish such a false accusation, when he wrote in 1881 that Doc Holliday killed Mike Gordon “and crept through one of the many legal loopholes that characterized [Justice of the Peace] Hoodoo Brown’s judicial dispensation.”

Unfortunately, Hoodoo Brown’s records for that period, if they never existed, are as scarce as issues of the Weekly Optic.—

Howard Bryan is the author of numerous books on New Mexico including Wildest of the Wild West which features Las Vegas, New Mexico.