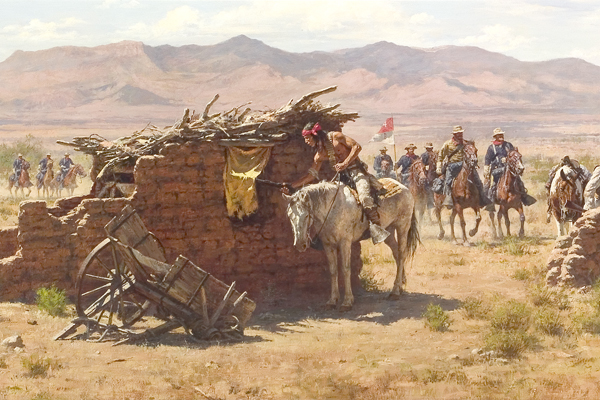 “Toward the end, Geronimo, with fewer than a hundred fighting men, retarded settlement of a land larger than Germany and France combined.

“For thirty years the Apache nation numbering no more than five thousand held off the American nation of fifty million. In this painting the Army cavalry, assisted by Apache scouts, are searching a ramshackle adobe hut for clues to the whereabouts of renegades,” Howard Terpning told Elmer Kelton, who was writing The Art of Howard Terpning, published in 1992.

“This painting,” called The Search for the Renegades, set a record price for the artist at the July 22 Coeur d’Alene Art Auction. Selling for a $1.3 million bid, the painting has put a contemporary artist like Terpning in the range of other million-dollar masters, such as Frederic Remington, whose An Apache, sold for the same bid at the auction.

What makes Terpning’s Renegades painting so striking is the bit of yellow cloth sticking out from the barrel of the scout’s rifle. That touch lends the 1981 work an air of sophistication that undoubtedly explains why Terpning is rising up the ranks in the Western Art world.

Terpning actually broke his previous record—a $320,000 bid for two works sold last year, He Rode Over His Enemy at Altermann Galleries and Offerings to the Sun at Coeur d’Alene, as reported in our May 2006 issue—earlier in the auction. Signals in the Wild went on the block, selling for a shocking $650,000 bid (the high estimate was $300,000). Next came The Stragglers, bringing in an amazing $950,000 bid (estimate was $550,000). But Renegades set the record in the end (the estimate for this million-dollar baby was a mere $500,000).

Terpning celebrates his 79th birthday this month, inching his way to the value of famed Indian portrayers, Remington and Russell, only 32 years after Terpning switched from a commercial art career to painting Plains Indian culture. Perhaps a vision quest prepared him for this day.

The 20th annual auction brought in nearly $25 million in bids.