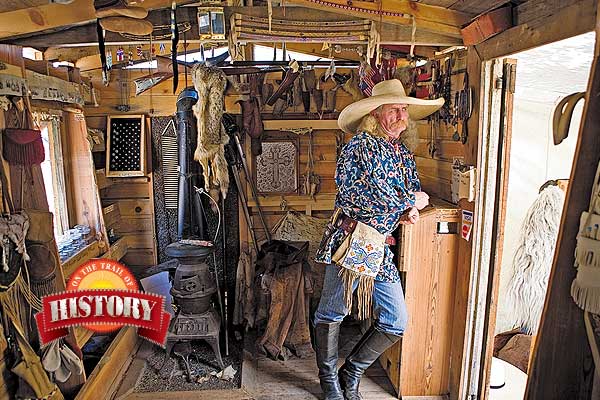 The Hill Country in Texas is steeped in rich history, and you can still step back in time when you visit. The area boasts historic sites, music, museums, restaurants and hotels to lure you into the 19th century. The Hill Country encompasses 25 counties,

including the state capital of Austin, where our journey begins and ends. Along the way you’ll discover how the military, cowboys and German immigrants shaped this historic area.

Austin’s location was chosen as the capital of the Republic of Texas and was incorporated in 1839 as Waterloo. Shortly after that, the town’s name was changed to honor Texas patriot Stephen Austin. Before Easterners migrated west to Texas, Mexican vaqueros were the area’s original cowboys of Texas. Austin’s early inhabitants were of German, Swedish and Mexican origin, and their divergent influences can be seen throughout the city.

Stroll along a 10-block area of Congress Avenue and discover several 19th-century buildings on the National Register district. There’s the Old Bakery that was built in 1876 and is now a consignment shop; the former cattle baron’s glitzy Driskill Hotel built in 1886 and still hosting guests in first-class style; and the Governor’s Mansion that was built in 1856, which Sam Houston later occupied. Check out the Bullock Texas State History Museum as well.

From Austin, drive southwest toward Bandera, which boasts itself as the cowboy capital of the world, and a fun series of Texas towns rich in German heritage. Just before you get to New Braunfels, swing by Gruene (pronounced green) and visit the historic district, including Gruene Hall, the state’s oldest functioning dance hall. New Braunfels, like Gruene, was founded by German farmers and craftsmen, in 1845. Their influence can be seen all over town. It was also a watering stop on the Chisholm Trail in the late 1880s. A walk downtown should include a tour of historic sites, including the Main Plaza building built in 1845. Also visit the 1852-53 Baetge House.

The town of Bandera began as a shingle manufacturing location where a mill was set up in 1852 to process the numerous Cypress trees along the creeks. With the establishment of Camp Verde in 1856 as a fort, Bandera Pass became a popular route to the north, somewhat protected from Indian attack by the U.S. Cavalry. Later, in 1874, it was the starting point of the Great Western Cattle Trail, which is also known as the Dodge City Trail and the Old Texas Trail.

Visit the Great Western Trail Heritage Park where a marker commemorating Bandera’s role as a starting point for cattle drives stands. Stop in for a milkshake or malt at the Bandera General Store, which is housed in the 100 plus-year-old building that was once Cox Dance Hall. It has the original wood floors and tin ceiling.

As you head to the German town of Fredericksburg, founded in 1845, pass through the 1850s settlement of Kerrville, an important cattle crossing and holding site on the Guadalupe River along the Great Western Cattle Trail. You’ll easily recognize Fredericksburg’s German architecture, including “Sunday Houses.” Unique to Fredericksburg, Sunday houses were small dwellings built near a church as a second residence for ranchers. Families came to town on Saturday morning for business and pleasure, spent the night, went to church in the morning and then headed home.

Visit nearby Fort Martin Scott, which was established as Camp Houston on December 5, 1848, and was an Army post to protect Texas settlers and travelers from Indian depredations. It’s interesting to note the Germans established a treaty with the Comanche Indians that was never broken by either side.

Fredericksburg is also home to the 1888 White Elephant Saloon, which was a “place of resort for gentlemen.” Cattlemen, cowboys and businessmen gathered here socially to enjoy their favorite libations or to play billiards, dominoes or cards. As you leave this area, which is steeped in Comanche history, stop by the Enchanted Rock State Park. This spiritual Comanche place in southwestern Llano County is about 20 miles north of Fredericksburg.

Llano is in the heart of Hill Country. Germans founded the town in the 1850s, and by the 1870s, it was a bustling, frontier trading center. Rural ranching and farming supported the small outpost, until rich iron ore deposits turned Llano into a boomtown in the 1880s. Tent cities went up, and mining went into full swing. When the iron ore became difficult to produce, Llanite granite became the town’s savior, and Llano had several granite quarries and finishing plants to support the trade.

Downtown, the Llano County Museum is housed in the old Bruhl Drugstore, built in 1922, it gives visitors a glimpse of Llano when it was a “boomtown.” Nearby, tour the landmark Llano County “Red Top” Jail, which operated from 1895 to 1982. It housed jailers and their families on the first floor, prisoners on the second and third floors, and a gallows on the fourth floor.

Head back west toward Mason, which was once home to Fort Mason, a cavalry outpost used by Lt. Col. Robert E. Lee as a duty station. From here, head toward Abilene with a stop along the way at Coleman, where thousands of longhorns were driven through Coleman County along the Great Western Cattle Trail. In 1856, the U.S. Army established Camp Colorado on Jim Ned Creek. Some remains of the stone and wooden buildings of this post still exist.

Before Abilene was a town, it was known as Fort Phantom Hill, which the U.S. Army established in 1851. This frontier garrison was occasionally occupied and was also used as a stagecoach and mail stop. According to Texas Fort Trail’s website, “The 9th U.S. Cavalry, a unit of the famous Buffalo Soldiers, fought Comanche and Kiowa Indian forces here in 1869.”

By 1875 pioneers began settling in the Abilene area, but it didn’t officially become Abilene until 1881. It was also in 1881 when the railroad reached the cowtown, and today visitors can see the Texas & Pacific Railroad Station that was built in 1910. In 1903 Abilene abolished its saloons, and it didn’t became a “wet community” again until 1978.

Fort Worth’s early history can be traced to 1849 when a blind spot in the state’s defenses was detected. Acting Col. William Harney, who replaced the deceased Maj. Gen. Williams Worth, sent a small party of dragoon troopers west to a spot near the Clear and West forks of the Trinity. They planted a flag on what is now Fort Worth. The strategic outpost became a key stop on the Chisholm Trail which, like many other cattle towns, had its share of saloons, cowboys and soiled doves. Because of its raucous red-light district’s reputation and saloons like the White Elephant (still open today), that area became known as “Hell’s Half Acre.” In 1876 the railroad reached Fort Worth, and cattle pens and stockyards soon sprang up—officially making it a cowtown.

Waco was always an important stop on the Shawnee and Chisholm Trails. In 1870, the local citizens opened a toll suspension bridge across the Brazos River. The railroad arrived as competition in 1872, but the cattle drives continued until 1884.

As you head back to Austin, pop into historic Freedmen’s, which was built in 1869 by a former slave named George Franklin. It was located in the freed slave community called Wheatville. The building was a residence, publishing house, church and grocery store. Look around this remarkable place, feel the history and start planning your return visit to this historically-rich area.