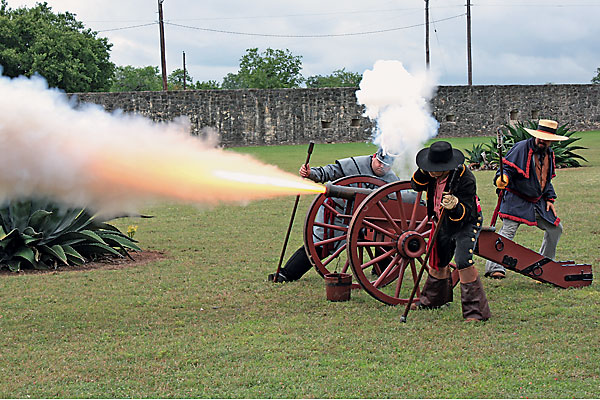 On March 27, 1836, Mexican troops placed a wounded Texian officer in a chair in the courtyard of Fort Defiance.

His back was to a 1779 Catholic chapel, where, earlier that day, most of his men had been held prisoner before they were marched out and executed by the Mexicans.

Then a firing squad shot Col. James Fannin to death—the last victim of the Goliad Massacre. Texian troops later buried his burned remains, and those of his 342 men, southeast of the fort, which reverted to its original name: Presidio la Bahia.

The Presidio still stands as a living testimony to nearly three centuries of history—but most schoolchildren don’t know much about it. “The kids have too much else to do. They’ve got the Internet and other things. And they’re just not doing the history.”

The speaker is Newton M. Warzecha, who is about to celebrate his 20th anniversary as director of this National Historic Landmark. The numbers back him up. About five or six years ago, he says, the Presidio hosted about 6,000 student visitors per year. In 2010, the number dropped to 2,200.

Factors beyond student disinterest also come into play. Schools gear their studies toward standardized exams that don’t cover places like the Presidio very much. Plus, schools have less money, especially to spend on field trips. “If a fourth grade class from Corpus Christi—which is about 80-90 miles from here—comes here, brings three buses, it costs them $1,000,” Warzecha says.

To mitigate the cost of coming to the Presidio, Warzecha, with help from the facility’s board, obtained a $50,000 grant from the Mary Hobbs Griffith Foundation based in Austin, Texas.

The grant covers free admission for students in 4th or 7th grade Social Studies, focused on Texas history, so teachers can take the class to the Presidio in March, April or May. Teachers receive a guide to prepare the youngsters for the visit (and lesson plans for after the trip).

Inside the Presidio’s chapel, the class learns the history of the fort dating back to the original Spanish Army establishment in 1721. Then a re-enactor takes the students around the compound, immersing them in 1800s life, particularly the Texas Revolution period.

What a complex they will see. Much of the facility was restored to its 1836 appearance during the 1960s. Highlights include the barracks, officer’s quarters (now housing the museum) and the Our Lady of Loreto Chapel, where services are still held by the Catholic Diocese of Victoria, which owns the Presidio. The chapel was also where the First Declaration of Texas Independence was signed, just three weeks before the Goliad Massacre.

After taking all that in, the students then go to the nearby Goliad State Park, the site of the Goliad Battle (and more). After a full day, they return home.

The students’ parents are given brochures on the Presidio as well. The hope is that they “may get interested in our history, and then that’ll reinforce what their children are trying to learn,” Warzecha says. “And maybe they’ll seek out other history.”

Warzecha’s formula for reimbursing some of the expenses incurred by the schools means the trip costs about $5 a student. (For a Corpus Christi class, that covers about half the travel costs.) Up to 10,000 students can visit the site this year. By late February, some 5,000 students were already signed up. Warzecha expects that number to grow, since some educators wait until the last minute to make reservations.

Warzecha is also looking ahead. “This is not a one shot deal,” he claims. “We hope to have funding to do this for many years to come. We’ve already raised some of the funds for next year.”

After all, he and the Presidio have a lot of history to share with young people.