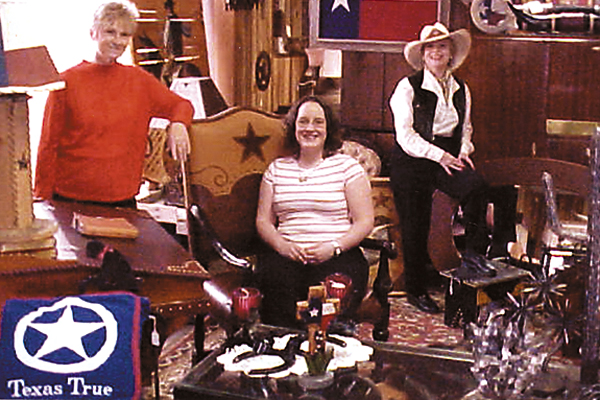 Some folks move to a new locale and do all they can to make their home look just like the one they left, but not Teresa Farish.

When she and her husband Ron moved to Tyler, Texas, from Washington, D.C. in 1982, Teresa embraced the Lone Star state as if she had been born there.

Having grown up watching TV characters Matt Dillon, Bat Masterson and Roy Rogers, Teresa developed a love for the Old West and the Victorian period in which the Old West flourished. Eventually, she defined herself as a Victorian woman “who came West with all [her] belongings in a covered wagon.”

In 1999, Teresa began to think about the craftspeople and artists she had met since moving to Texas. Before long, her thoughts crystallized into opening a store filled with goods that were 100 percent Texas-made—in Teresa’s words, a store that would reflect the “spirit of Texas.”

Texas True opened as a small retail shop on Thanksgiving weekend 2000. Within six months, Teresa had taken over a 6,000-sq. ft. showroom, filling it with everything from beds, lamps, tables, throw pillows and artwork to “gourmet goodies” that include jams, salsas and Texas Sweet Crude (instant chocolate) … all made in Texas. Although Ron has a day job, managing his aircraft sales company, Teresa has turned him into a part-time artisan, custom building horn leg coffee tables.

Living in Texas and extensive reading about Old West history has made Teresa appreciate the women of the West. As she says, “Nothing can stop them.” We’re certain that a virtual tour of her website (www.texastrue.com) will persuade you that nothing can stop Teresa either.