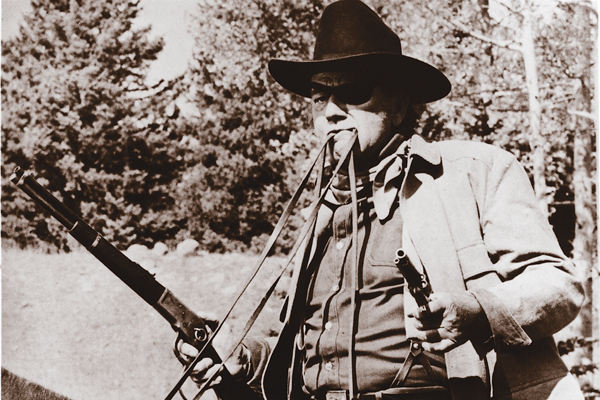 For generations, moviemakers relied on the classic lines and smooth action of the ’92 Winchester to depict the archetypical saddle rifle of the Old West. This model has probably seen more use in Westerns than any other rifle that is remotely associated with the American frontier.

Much to the chagrin of Western and firearms students, the ’92 Model has been used in films like The Comancheros (1961), which supposedly takes place in 1843, and countless Civil War flicks—depicting events that took place as much as a half century or more before the rifle’s invention, and a good many years before the introduction of any metallic cartridge lever gun.

But as they say, that’s the “magic” of movies. Besides, no matter how much the movie ads hype a film’s authenticity, motion pictures are made for entertainment, not history lessons.

This brings to mind what has to be the best known movie rifle of all time—John Wayne’s 1892 Winchester big-ring lever carbine. Who can deny the appeal that the pairing of these two larger-than-life legends had in their many films together?

Remember that first rush of excitement in Wayne’s 1939 epic Stagecoach when as a young Ringo Kid, unhorsed and stranded in the arid, sandy wastes of Monument Valley, the Duke boldly hailed a rumbling coach to a halt by standing square in its path and twirling his large-loop ’92 carbine out to his side?

A full three decades later, in his 1969 Oscar-winning performance as Rooster Cogburn, the crusty, one-eyed, over-aged and overweight U.S. marshal in True Grit, 62-year-old Wayne still rode tall in the saddle. Recall that classic silver screen moment when Big John put his reins in his teeth, drew his Colt six-shooter in one hand and, with the other, levered his trusty big-ring ’92 Winchester carbine by giving it that familiar twirl, as he had done so many times before. Then with a bravado that could only be mustered by a Western legend such as Wayne, he galloped headlong into a passel of moviedom’s most notorious villains—one of the more memorable action sequences in the history of film.

In recent years, the ’92 Winchester has taken a back seat to a number of other frontier longarms, thanks largely to a more sophisticated and demanding film-going audience and the availability of accurate replica rifles and carbines such as the 1860 Henry, 1866 and 1873 Winchesters, the Spencer and even the Sharps and Remington single-shot buffalo guns, to name a few. Nonetheless, the old ’92 Winchester played its on-screen role aptly through decades of filmmaking, and to many Western fans, it could be called “the gun that won the reel West!”