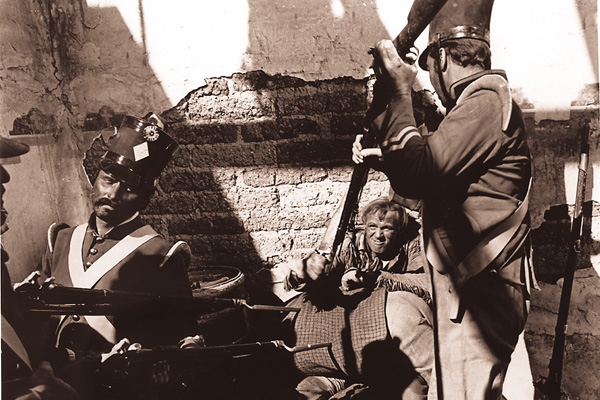 To say that Alamo movies are historically inaccurate is a bit like saying that Godzilla is a tad green and scaly.

Most filmmakers couldn’t care less about trying to authentically replicate the time and place and, more important, the people involved. Most of them seem to feel that true history is too boring and that the vast viewing audience is more interested in long, lame speeches, wooden acting and contrived action sequences that never happened at the Alamo or anywhere else (can you say “feather fight?”).

We can treasure the low-budget Heroes of the Alamo (1937) for its concentration on the Dickinson family, rather than on the Holy Trinity of Crockett, Bowie and Travis. And Republic Pictures’ epic about Sam Houston, Man of Conquest (1939) has the most authentic Alamo garrison—not coonskin cap-wearing yahoos, but tail-coated, top-hatted average citizens of 1836.

The peculiar looking Alamo, defended almost entirely by fictional characters, in Davy Crockett, King of the Wild Frontier (1955) offers a rarity—a believable sense of siege, with members of the garrison growing hungry, impatient and short-tempered. And The Last Command (1955) lays out the complex political issues that preceded the bloodbath of March 6, 1836.

John Wayne’s The Alamo (1960) otherwise a complete and total work of fiction without a single authentic word, character or scene—has the most convincing mission compound with the lovely, nearly accurate, set built on Happy Shahan’s ranch near Brackettville, Texas (a set which, by the way, becomes less authentic with every ensuing film). Martyrs of the Alamo (1915), The Alamo: Shrine of Texas Liberty (1938), Seguin (1981) and Gone to Texas (1986) all portray the still-controversial moment when Alamo survivors are executed after the battle. And the IMAX production, Alamo: the Price of Freedom (1988) is unique in presenting the battle raging in the pre-dawn darkness.

Frank Thompson is a noted film historian and author of such diverse works as The Blind Date Guide to Dating and The Alamo: a Cultural History.