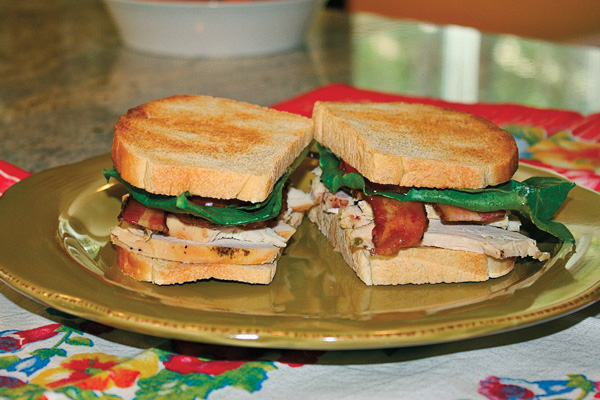 On his way from Illinois to California in 1852, William Henry Hart wrote, “The bacon too that I had  always disliked even the sight of, became very good eating proving that nothing makes us relish our food as much as a good appetite.”

Bacon was one of the few meat staples that traveled well, whether it was along the emigrant trail or cattle trail. As Randolph B. Marcy noted in The Prairie Traveler, his 1859 handbook that proved an indispensable guide to Overlanders as they trekked to the West: “Bacon should be packed in strong sacks of a hundred pounds to each; or, in very hot climates, put in boxes and surrounded with bran, which in a great measure prevents the fat from melting away.”

Weary pioneers found more than just “meat” in bacon; they also turned to the cured meat to cure ailments. Oregon pioneer Mrs. Ernest Truesdell remembered folks wrapping bacon around their necks to cure a sore throat. That must have made the patients smell pretty tasty.

Another medical use for bacon was to cure yourself of chiggers. Yes, you read that right—chiggers—those almost invisible creatures that burrowed their heads under your skin. On June 23, 1896, The Sioux City Journal in Iowa reported that remedy in light of picnic season: “A crisp piece of breakfast bacon showing a streak of lean and a streak of fat in the proper proportions is poison to the chigger…. While bacon may render vain the chigger’s sharp bill. The scent of the smokehouse will linger there still.”

In Salt Lake City, Utah, The Semi-Weekly Telegraph reported in 1866 that bacon could be used medically as a poultice, covered with black pepper or spiced hog jaw marrow.

In the fall of 1882, a California woman used a slab of bacon to take on the Southern Pacific when the railroad refused to reimburse her. Lucy Tutaine, a widow with two young sons, lived on a small ranch adjacent to the steep San Gorgonio grade of the Colorado Desert. Her only cow wandered on the unfenced train tracks and was killed. She asked the railroad to reimburse her, but was denied. Poor Lucy needed the milk for her family, so she took matters into her own hands.

She took a giant slab of bacon to which she had added a rope. She then had her sons take turns using it as a sled while she pulled it up and down the train tracks. As the passenger train climbed the steep grade, it struck the well-greased rails and could not make it up the hill. A long delay ensued while frustrated passengers waited for crew to apply sand to the tracks.

The greasy bacon tracks were eventually traced back to the cow-less Lucy. She freely told her story, with the hope of getting satisfaction. When she was threatened with arrest, she replied that the police could arrest her, but as soon as she was free, she would do it again. She wouldn’t stop until the railroad paid for her cow. The railroad reimbursed the widow. Her children no longer had bacon sled rides, but they did have milk.

Instead of using bacon as a sled, try a tasty Victorian club sandwich.

Touted as the “favorite lunch dish when you don’t want anything,”
this club sandwich calls for two slices of toast filled with a slice of cooked chicken and a
piece of cooked bacon, two lettuce leaves and a slice of tomato. Finish it off by slathering
a generous layer of mayonnaise on the top piece of toast.

Recipe from The Sunday News-Tribune in Duluth, Minnesota, August 20, 1899