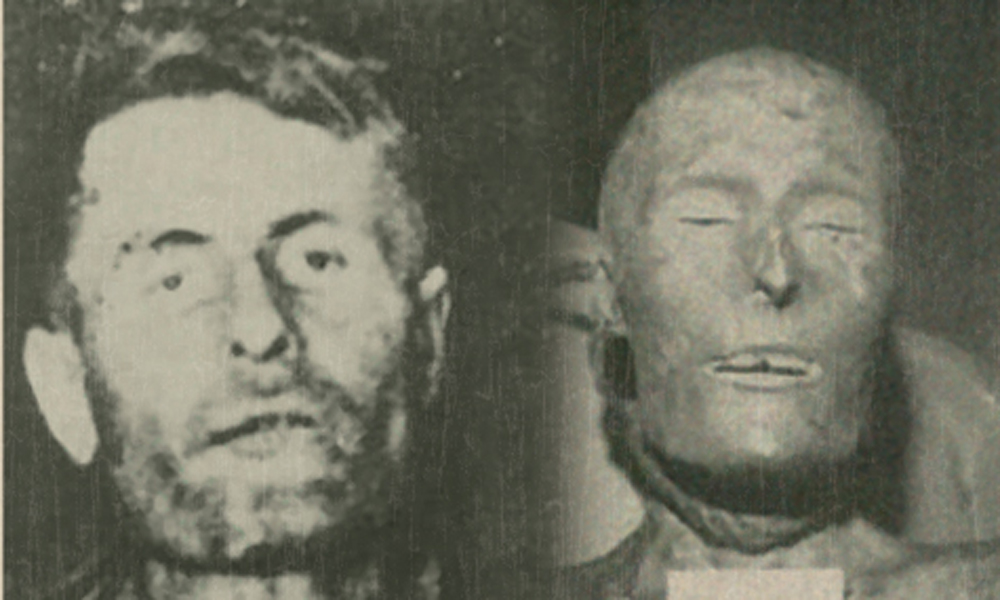 Elmer J. McCurdy was one of the worst safe men the Old West ever saw. In March of 1911, he tried to rob the Iron Mountain-Missouri Pacific train which was reportedly transporting $4,000. After stopping the train and locating the safe, McCurdy used so much nitroglycerin the majority of the money was destroyed. They managed to escape with roughly $450 in silver coin, most of which was melted in the blast.

Six months later, McCurdy and his crew tried to rob the Citizens Bank in Chautauqua, Kansas. This time McCurdy used so much nitro, the vault door was blown clear through the bank. However, when he tried to crack the interior safe, he couldn’t light the charge. Eventually, they grabbed $175 in loose coin and made a run for it.

His final robbery was probably the worst. On October 4th, 1911 McCurdy and his men planned to stop the Katy Train which was carrying $400,000 to the Osage Nation. Even if McCurdy blew up the majority of the loot, that’s still a fair haul. Of course, this being McCurdy something was bound to go wrong. Imagine his surprise when he managed to stop the train, climb aboard only to realize his mistake. He had stopped the wrong train. Unwilling to leave empty handed McCurdy snatched $46 from a mail clerk, a pistol, two jugs of whiskey, someone’s coat, and the conductor’s watch. Three days later, a drunk Elmer J. McCurdy was surrounded by the law and shot dead putting an end to his reign of mediocre terror.

Now this is where McCurdy’s story really gets interesting.

Poor Elmer’s body was taken to Johnson Funeral Home in Pawhuska, Oklahoma where it went unclaimed for some time. Because of this the owner, Joseph Johnson, embalmed the body using an arsenic preservative to halt decomposition. Hoping to make a dollar off the unclaimed cadaver, Johnson gave McCurdy a shave, dressed him in street clothes, and put him up for display. For a nickel, you could see the “Bandit Who Wouldn’t Give Up”. The popularity of “The Bandit” was such that many side show and carnival promoters offered to buy him, but Johnson refused to sell.

This would go on for five years until out of the blue, McCurdy’s long lost brother Aver arrived in town to claim the body. After satisfying local law enforcement and paying the Johnson Funeral Home for expenses, the body was released into his care where it was supposed to be shipped to California for burial.

Instead it was sent to Arkansas City, Kansas. It turns out that Aver’s real name was James Patterson, partial owner of the Great Patterson Carnival Show. McCurdy’s corpse was renamed “The Outlaw Who Would Never Be Captured Alive” and traveled with the carnival until 1922. Following a series of owners the body eventually ended up in a L.A. warehouse until 1968 when it was sold to the Hollywood Wax Museum and then in 1976 to the “Laff in the Dark” funhouse at The Pike in Long Beach, CA.

On December 8, 1976 the crew for The Six Million Dollar Man were filming an episode in the funhouse where McCurdy’s body was thought to be part of the set. However, when one of the prop men tried to rearrange the “wax mannequin” the arm broke off, revealing human bone and tissue. The police were called in and an investigation ensued. After a slew of forensic tests and detective foot work, McCurdy was identified. On April 22, 1977, a funeral procession transported McCurdy to Boot Hill in Guthrie, Oklahoma. McCurdy was buried next to Bill Doolin, pretty good company considering McCurdy never managed to successfully complete a single robbery.