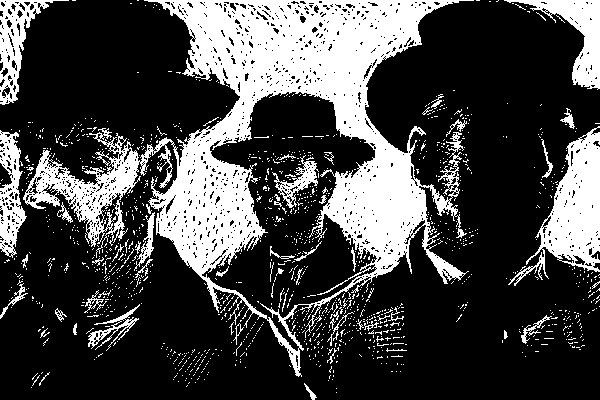 It’s just past 2:00 p.m. when three horsemen wearing matching white linen dusters dismount in front of the First National Bank in Northfield, Minnesota. After tying their reins to hitching posts, they stroll to the corner (see phase 1, page 27), sit on some dry goods boxes and exchange pleasantries with several locals. Two more horsemen wearing linen dusters approach up Division Street from the south. Several minutes later, three more horsemen, also dressed in matching dusters, cross the iron bridge and stop in the center of Mill Square. The threemen seated on the corner stand, walk back to the bank, and then go inside.

Four horsemen ride back and forth before the bank, firing at any who dare to show their face. But instead of cowering, the locals come out with everything they have: flintlocks, fowling pieces with mismatched ammunition, birdshot plunkers, frying pans and rocks. One pesky storekeeper even aims an empty pistol to draw fire and taunt the brigands. A Swede named Gustavson, who doesn’t speak English, comes out of a cellar saloon and is shot in the top of his skull after he fails to respond to one of the robber’s commands. (He dies several days later.)
Suffering from his face wounds, Clell Miller remounts and pulls his pistols. As he turns his horse to ride up Division Street, he is hit again, the bullet severing the outlaw’s subclavian artery, and he falls to the ground in a heap. Cole Younger rides over to Miller and dismounts. Quickly rolling his comrade over, Cole sees the blank stare of death stamped on Miller’s bloody face. As he is leaning over Miller, a bullet rips into Cole’s left hip. The elder Younger grabs Miller’s two revolvers and remounts. Birdshot and buckshot whistle past his ears as Cole again rides to the bank door and pleads for the boys to leave. “I could not imagine what was keeping them so long,” Cole later said.

Seeing a chance to escape, teller Alonzo Bunker dashes out the back door and is chased by Charlie Pitts. Firing twice, Pitts hits Bunker in the shoulder, but the banker escapes. With their plan unravelling at every turn, the outlaws finally heed Cole’s third call and prepare to leave.
Outside, townsman A.R. Manning bravely steps from behind the stairway at the corner of Scriver’s and takes quick aim at outlaw Bill Chadwell (Stiles). Manning fires and Chadwell topples from his horse, shot through the heart. (It was also Manning who hit Cole Younger in the hip.)
“For God’s sake come out,” Cole pleads from the doorway of the bank, more desperate than ever. “They are shooting us all to pieces.”

“There were no saddle horses in evidence, and we calculated that we would have a considerable advantage. Wrecking the telegraph office as we left, we would get a good start, and by night we would be safe beyond Shieldsville, and the next day could ride south across the Iowa line and be in comparative safety.”
—Cole Younger, describing their original plan before everything went wrong.