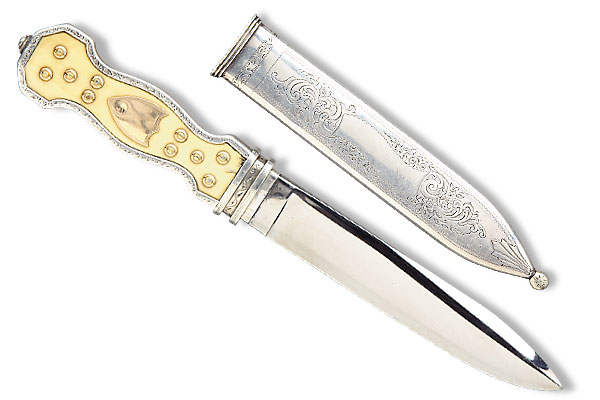 “I have seen purer liquors, better segars [sic], finer tobacco, truer guns and pistols, larger dirk and Bowie knives, and prettier courtesans here in San Francisco than in any other place I have ever visited, and it is my un-biased opinion that California can and does furnish the best bad things that are obtainable in America.

Thus wrote Hinton R. Helper in his 1855 book, Land of Gold: Reality vs. Fiction, published by the North Carolinian after a three-year sojourn to Gold Rush country. He probably saw larger Bowie Knives because Old San Francisco was home to some of the best Bowie knifemakers around, including three well-known cutlers whose Bowie Knives were the top sellers in Greg Martin’s auction on April 24: Michael Price, H. McConnell and Will & Finck.

When a stabbed, shot and badly beaten Jim Bowie mustered his remaining strength and thrust his Bowie Knife at his enemies to win the notorious Sandbar Fight near Natchez, Mississippi, in 1827, the legacy of the Bowie Knife was born. Its fame grew when Jim got in a knife fight in Texas and supposedly used his Bowie to decapitate one man, disembowel another and split open the skull of a third. When he died at the Alamo in 1836, the Bowie was well on its way to becoming the “King of Knives.”

The Bowie Knife deserves its legacy though. Its hallmark large blade and unique shape allows it to be utilized as both a weapon and a tool for fishing and hunting. James Black, a blacksmith in Washington, Arkansas, is often credited for making the knife that Jim Bowie popularized. The style remains popular with collectors, and there is even a collectors club called the Antique Bowie Knife Association, which is based in New Haven, Connecticut.

The exceptional Bowie Knives offered by Greg Martin brought in more than half a million dollars in bids.