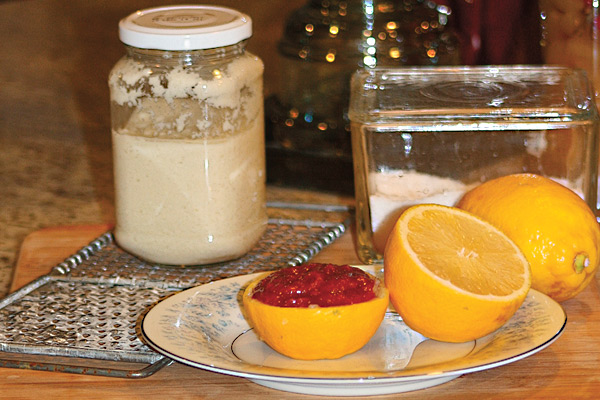 I get hoarse after eating strong horseradish, but Henry Scammell felt otherwise. “Horseradish will afford instantaneous relief in most obstinate cases of hoarseness.

The root possesses the most virtue, though the leaves are good till they dry,” wrote Scammell in his 1897 cookbook, Cyclopedia of Valuable Receipts.

He recommended cooks add horseradish to milk to preserve it, but I bet using that milk for tea or coffee would not have been tasty. He also suggested it for homemade cider, both as a sweetener and a way to clear up cloudy cider.

Horseradish was enjoyed as a food—especially with meats like roast beef—and served straight up or as a sauce. One famous condiment company, Heinz, got its start selling horseradish from the family vegetable patch!  In the post-Civil War era, Heinz began selling horseradish to the masses as a canned good.

Near Omaha, Nebraska, A. Fallon and a boy named J. Thompson had a hankering for horseradish that led to their arrest for larceny in December 1891. A deputy marshal discovered the pair with a gunny sack of freshly dug horseradish, stolen from a “truck garden,” a business that provided locals with a supply of freshly grown produce throughout the growing season. Joe McPherson reported the robbery because he was getting sick of the frequent raids on his garden.

Folks also used horseradish as medicine to supposedly cure ailments like “Grippe” and “Dropsy,” and as a poultice for aches and sprains. The Cherokee tribe used horseradish to treat asthma and relieve coughs and bronchitis. Despite the horse in its name, don’t ever give horseradish to your horse; it’s poison for them.

Combining whiskey and horseradish might have been deadly to one poor soul in Little Rock, Arkansas. In June 1900, a wife gave her ill husband some whiskey with a side of horseradish.

“There was great excitement among the colored Baptist population yesterday on account of the death under alleged suspicious circumstances of Jeff Beard, colored, who was the janitor of the First Baptist Church…the attending physician, Dr. Suggs, colored, thought there were symptoms of poisoning,” The Arkansas Gazette reported on June 29, 1900.

At the coroner’s inquest, “…a verdict of death from unknown causes, supposed to be natural, was rendered,” the newspaper reported. “Dr. Young says death was probably due to a congestive chill. His wife said he drank all the whisky  [sic] but did not eat the horseradish. Although the combination might be such as would produce paroxysms of pain, still it would not be fatal.”

Horseradish landed on the dinner table in novel form in Helena, Montana. Instead of passing condiments separately for a dinner of raw oysters, folks were handed a plate with a lemon on it. “It is open at the top, and its contents have been entirely removed. It has then been filled with a sauce made of tomato catsup, horseradish and similar things to those used in an oyster cocktail. Before eating them each oyster is taken up on the fork and dipped in the sauce within the lemon,” The Daily Independent reported on February 16, 1900.

Make Helena’s tasty cocktail sauce from the shared recipe and serve it up 1900s-style, in a lemon!

Combine all the ingredients in a bowl and stir to blend.
Note: Add any amount of horseradish to your liking.