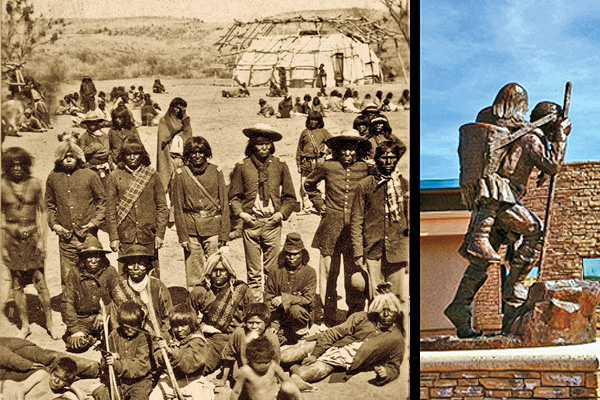 Just 81 words tell the story—but they’re powerful enough to represent the struggle and courage of the Yavapai-Apache people of Arizona’s Verde Valley.

Those 81 words come from William T. Corbusier’s book, Verde to San Carlos, which recounts his army surgeon father’s memories of the forced relocation of these people to the San Carlos Reservation that began on February 27, 1875—1,476 people carried everything they owned in burden baskets over 180 miles in the winter.

He wrote: “One old man placed his aged and decrepit wife in one of these baskets, with her feet hanging out, and carried her on his back, the basket supported by a band over his head, almost all the way.  He refused help, except at several stream crossings, where he was persuaded to allow a trooper to take her across on his horse. Over the roughest country, through thick brush and rocks, day after day,
he struggled along with his precious burden—un-complaining.”

Those 81 words have inspired a nine-and-a-half-foot bronze statue, the Exodus Monument, erected in 2014 at the Yavapai-Apache Cultural Resource Center in Camp Verde. It depicts the old man carrying his ailing wife.

“We don’t know their names, we don’t know if they were Yavapai or Apache, but that doesn’t make any difference because they represent both tribes,” says Vincent E. Randall, former tribal chairman and now tribal historian.

Two women led the charge to build the monument—one a Yavapai, the other, white. Monica Marquez, the Yavapai who now is a Tribal Council member, says a $50,000 grant from the Arizona Office of Tourism in 2007 launched the project.

“To me, the monument represents the burdens we have carried with us continuously,” Marquez says. “It shows our struggle to survive. There was a war against us, so that man also represents our veterans.”

Judie Piner, the white who is the council’s administrator of preservation and technology, says, “I like to think the statue speaks of courage and bravery.”

Marquez and Piner got creative to raise the $350,000 that winning artist Doug Hyde quoted. They created a calendar that shared the tribe’s history and a mesquite cookbook, and sold some statue mock-ups. But their efforts brought in only about $12,000.  The rest of the money came from the Tribal Council.

The tribes spent about 25 years on the San Carlos Reservation before they returned to the Verde Valley in the 1900s.  They came home to find their land claimed by white settlers, making the tribes homeless. In 1909, they were given a small reservation that offered little to keep them out of poverty, Randall says, until they opened Cliff Castle Casino in 1995.

Today, the nation has 2,414 enrollees, and its popular casino is the biggest employer in the area, he adds.

Now the tribes have a monument that, he says, “proves our people