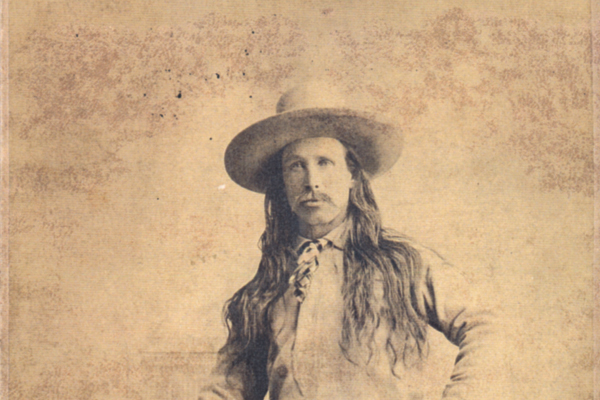 Sure, Commodore Perry Owens looked like a dude with his long hair, fancy duds and good looks.

The man was definitely stylin’. But he made his bones the hard way, going against the odds on a fall day in 1887.

Owens was sheriff of Arizona’s Navajo County during the feud known as the Pleasant Valley War; he was out to arrest Andy Blevins for rustling when he ran into resistance. Guns were drawn, shots were fired and, in a matter of seconds, Blevins and two of his kinsmen were dead, and his brother John was wounded. Owens shot five bullets to bring down the four men.

The best-known photo of Owens (right) shows him holding a rifle in his right hand, with his pistol in a crossdraw rig on his left side. Nice pose—but something’s a little off. The holster drops low off the gun belt in what looks to be a buscadero style … which shouldn’t have existed at the time.  Some claim that Texas Ranger Capt. John R. Hughes developed the style in the 1890s, or that Mexican vaqueros came up with the idea after the turn-of-the-20th-century. But most of the experts say the buscadero was created by Hollywood for the Westerns of the 1920s; it looked cool, and actors could draw faster during the shoot-out scenes. Back in the 1880s, holsters (when they were used) looped over the top of the belt; low-slung holsters like the buscadero weren’t common.

Now we’re not here to settle that argument, either with words or shootin’ irons. But we can say that the buscadero continues to grow in popularity amongst the Old West set. Fine leather working and metal or jewel adornments have really boosted the style quotient of this and other rigs. And that’s something Commodore Perry Owens would really appreciate. We think you will, too.