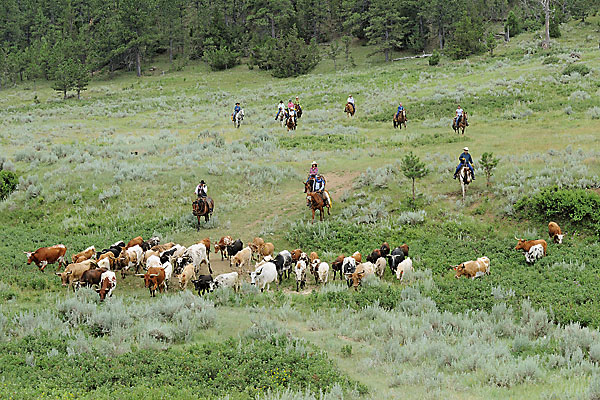 I have driven cattle in New Mexico, Colorado, Texas and even in Uruguay and beyond, participating in everything from city slicker-type drives to authentic working ranch overland herds.

I tend to prefer the latter, which can be harder to find these days. Many ranches have traded horses for trucks, hauling cattle instead of driving them.

In my search for great, true Western cattle drives, here is one of the more interesting roundups you can participate in this summer that puts history at the forefront.

In 1989, around 2,400 people and 2,800 cattle traveled 50 miles in six days from Roundup to Billings for the Montana Centennial Cattle Drive. Inspired by this grand event, ranchers and residents of Powder River in southeastern Montana began their own cattle drive a year later, inaugurating as a nonprofit organization called the Powder River Cattle Drives. I chose to highlight this particular July cattle drive because it gives a different perspective on modern ranch life in Montana.

Participants are charged with driving around 45 Longhorn cattle through private ranches in the Powder River area, ranches that would not normally be open to the public, making this a special ride to remember for the ages.

The town was named for the Broaddus family, which settled along the Powder River, about 17 miles south of the present-day town. Oscar and John Broaddus originally came to Montana by 1887 to work for their Uncle Jessie Haston, who had located grazing range for the Newman brothers’ Niobrara Cattle Company, which owned a ranch in Texas. When the devastating 1886-87 winter closed the N Bar Ranch, the Broaddus brothers established their own homesteads. The post office finally came to the area in 1900 (accidentally dropping a “d” from the name).

Starting in Broadus, guests of varying skill levels ride the beef cattle ranches in the wide-open country of Montana’s Great Plains. Located between the Black Hills and the Little Big Horn Battlefield, the terrain includes deep rough canyons, high ridges and abundant wildlife. Those who aren’t as horse savvy can hitch a ride in a covered wagon.

As you ride, you meet the local people at these ranches and see them in action, working together to gather, brand, doctor and inoculate cattle. As you watch them pitch together to get the hard job of it all done right, you’ll gain greater insight into life in this rural community where many families have been ranching for generations.

Historian Calvin Ride, who is now in his 80s and accompanies the ride, thinks that guests participate for different reasons. Not only are folks drawn to the neighbor-helping-neighbor atmosphere, but they also enjoy the area’s diverse geology and history, as well as the thrill of riding fast under Montana’s Big Sky.

You won’t be riding a dude string here, but real ranch horses, matched to your personal ability. And this is not a nose-to-tail ride. Groups of five or six people are assigned to a wrangler, yet each group does not have to stick to any trail or set path; riders can make their own pace. Each night ends at a new campsite that has been set up by the ride organizers, who also cater food and provide entertainment, garnering this overland herd, what some have said, as the “Cadillac of Cattle Drives.”