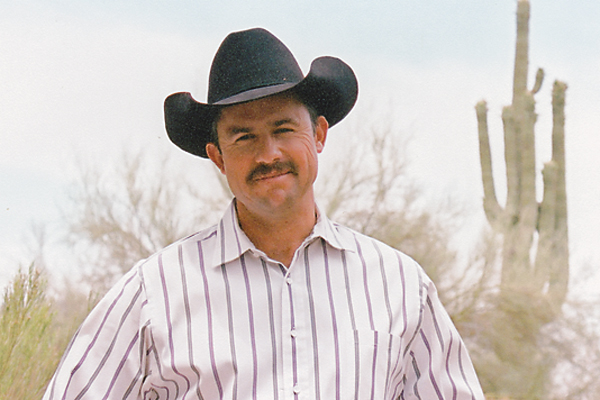 I’ve always felt that God must have a special place in his heart for cowboys.

How else can you explain why he gave us such a wonderful chance at life? I’ve been to church a few times, and it’s a pretty darn good place, I do believe. There seem to be lots of folks there who, if they don’t have their hearts in the right place, sure appear to be working hard at it.

When I was growing up, we never got much religion. Sundays were just another day, and some job was always needing to be done. It seems to me that when you’re a cowboy, you have to find your religion where you can.

One thing about being a cowboy I’ll always miss is the silence. It’s hard to find silence nowadays; there’s always something happening, someplace to go or someone to listen to. I truly miss silence so deep the only sound you hear is the ringing in your ears. It lets you think and feel and find out about yourself.

I remember one day I was riding alone way up high in the Cerbat Mountains in Northern Arizona. It was one of those days that was so perfect you never even notice if it’s too hot or too cold. I remember the horse I was riding was named Sage. He was one of those rare ponies that never needed to be shod, so even in the rocks there was no ring of a shoe on stone.

I was having a lot of confused thoughts and was struggling to find some answers. It finally got too big for me, so I reined in on a ridge and got off. I don’t know why really. I guess I wasn’t getting anyplace while moving, so I thought I would stop a spell. I was just sitting on a rock, holding a rein and thinking some pretty deep thoughts—maybe too deep for what many may have mistaken for a carefree cowboy.

Now Sage never missed a thing.  Don’t know how long I sat there before Sage threw his head up and let out a soft, rolling snort. I looked across the canyon, and there stood a small band of mustangs. Right below them were a couple of big buck deer looking back at me.

I no sooner took notice when it was as if someone had lit ’em up with a spotlight. The clouds parted and a circle of light fell on that little group of wild things—as wild as the day the earth was born. It was so beautiful it made me remember to breathe again. Then I heard it. It was there all along, but I hadn’t noticed: the soft, almost-not-there gurgle of a small stream that was falling down the canyon. I stood up and took off my hat, and Sage and I watched in awe the show God had placed before us.

These days I only go to church when my wife asks me, and it still doesn’t feel quite right. I guess when you’ve seen the church of the far-off places, nothing else quite fills the bill.