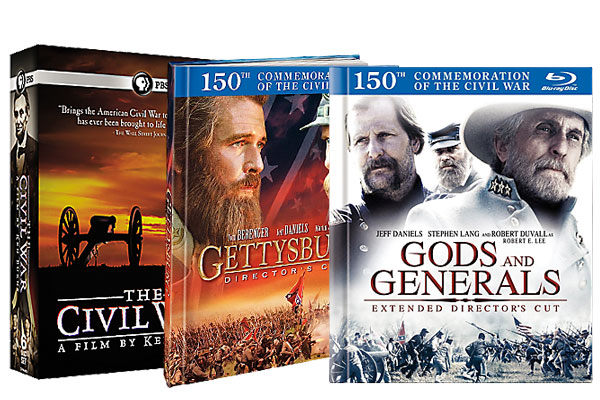 In 2002, Burns remastered the series, digitally overhauling the visuals and adding a commentary. The result was a five-disc DVD that came out in 2004.

This year, for the 150th anniversary of the Civil War, he’s re-released the box set with a sixth disc offering new interviews and unseen footage. Burns’s work can both inspire novices and gratify scholars and diehard aficionados.

Also among the Civil War films hitting the market are expanded DVD and Blu-ray editions of 1993’s Gettysburg and 2003’s Gods and Generals.

Gettysburg, which also takes its inspiration from Shaara’s novel, offers up top talent like Jeff Daniels and Stephen Lang, and scenes shot in the actual locales; you’ll never see a clearer depiction of these incredible events. The latest edition offers an extra 17 minutes of footage and a featurette by director Ron Maxwell.

Gods and Generals, a prequel to Gettysburg, is based on the novel by Michael Shaara’s son Jeffrey. This new edition is re-edited, adding the story of John Wilkes Booth and the battle of Antietam.

Both films were released separately in May, but will be available together in a Collectors Edition box in early July.