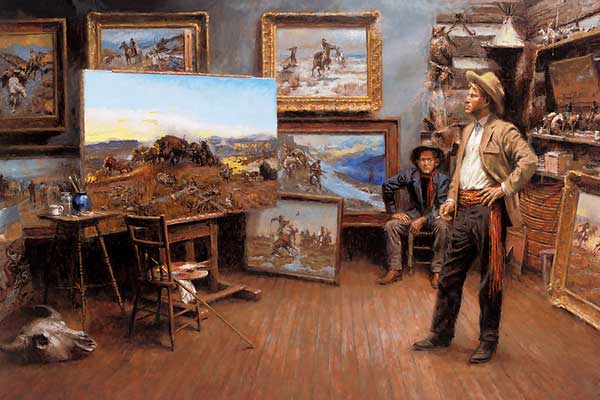 Pretty much everyone in the art world knows the name Charlie Russell, but not so much John Norval Marchand, even though he is the artist who introduced Russell to the New York scene.

Marchand’s artwork is becoming highly collectible; his oil, Pointing the Beef Herd, earned a world record for the artist when it sold for $85,000 at March in Montana in Great Falls on March 16.

Marchand even shared his studio with Russell, whose work earned its highest price achieved at the C.M. Russell Museum’s benefit auction, which also took place on March 16 in Great Falls.

Marchand died young, at 46, yet he was prolific, with a career that included illustrating approximately 35 books, such as David Belasco’s bestseller Girl of the Golden West. Born in Leavenworth, Kansas, in 1875, he took his firsthand knowledge of the frontier to his New York studio. He met Russell while Marchand was visiting cowboy poet Wallace Coburn’s family ranch in Montana during the summer of 1902.

“My friend, Marchand, took me around and introduced me to the art editors of the big publishing houses, which was might fine for me. Many of the editors promised me work in the future in illustrating western stories,” Russell told the Great Falls Tribune on February 16, 1904, after his four-month trip back east that included a visit to New York City. During that same trip to New York, Russell also met artist Charles Schreyvogel, gunfighter-turned-newspaperman Bat Masterson and actor William S. Hart, who he ate freshly dug clams with on Rockaway Beach.

Russell recalled a time he was “kicking around the studio” with Marchand, who told him, “No matter where you come from, if you walk on Fifth Avenue for an hour, you’ll meet somebody you know.” Russell tried out the theory and met Judge Dudley DuBose from Fort Benton. “He was down there from Alaska,” he said. “Well, we had a good time talking about Montana.”

When Russell came across a “line of men two or three blocks long,” he asked Marchand “what the show was?” Marchand told him it was for “poor devils without anything to eat” who got sandwiches at the end of the line. “It was a tough sight,” Russell said. “I’d rather take my chances in this country [Montana], where a fellow can make a stand-off occasionally.”

After sharing how much he preferred his adopted home of Great Falls, Montana, Russell commented, “Say, my advice, to anybody that does not love home, is to just go down and live in New York for a while. He’ll sure love home then.”

Did Russell profit from his trip back East? Art historian Brian Dippie credits the “constructive criticism of his artist friends,” including Marchand, for “Russell…correcting the mistakes he had been unable to see.” By 1905, Russell was receiving between $200-$400 per painting, Dippie reports in Charlie Russell Roundup. That year, the cowboy artist entered the prime of his career, lasting through 1920, during which he created some of his most famous artworks.

How fitting that the two friends should make such high marks during Montana’s celebrated Western Art Week.