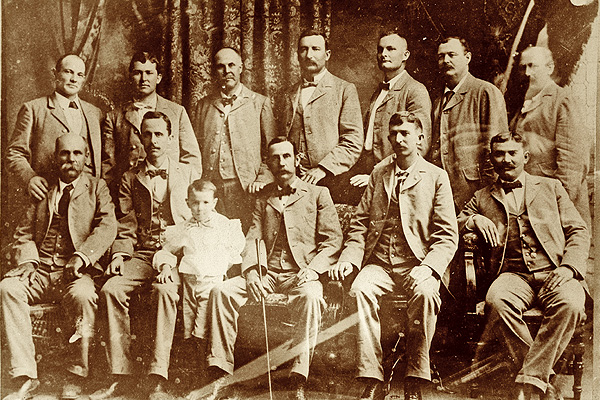 The 1908 Christmas holidays weren’t good for Manny Clements. In fact, the year’s end brought about his end as well.

That Manny would have a violent death should be no surprise. His Texas gunthrower father, Emmanuel Sr., died in an 1887 shoot-out. The baddest shootist of all, John Wesley Hardin, was Manny’s first cousin once removed. And his sister, Sally, married assassin “Killin’” Jim Miller.

Manny himself didn’t do a lot of shooting—although in 1894, he was hired to kill Pink Taylor in Alpine, Texas. Perched in a tree and firing into a saloon, Manny gunned down the wrong man. He hightailed it to El Paso, where he became a lawman.

Manny apparently played both sides of the law. Research indicates he was linked to a group of New Mexico ranchers and bigwigs, including Oliver Lee, W.W. Cox, Bill McNew and legislator Albert Fall. These men had their fingers in a number of pies, including land and water rights, rustling, bribery and the smuggling of Chinese laborers from Mexico into the United States.

In late 1907, several of the men met in El Paso’s Hotel St. Regis to plot the murder of Pat Garrett, the lawman who put Billy the Kid in the ground. Garrett had been after several of the ranchers for more than a decade; beyond that, his ranch was a prime spot for a human trafficking way station. Miller was reportedly paid $1,500 for the hit, carried out on February 29, 1908 (see True West February 2014).

Later on that year, Manny was charged with armed robbery. Although he was acquitted, his law career was over. A heavily drinking Manny quite possibly threatened to blow the whistle on the Garrett assassination unless he was paid hush money.

He got a different kind of payment.

On December 29, 1908, Manny was imbibing in El Paso’s Coney Island Saloon, a headquarters of the Chinese smugglers. His drinking companion was Elmer Webb, identified as a member of the smuggling operation. At about 6:15 p.m., somebody walked up behind Manny and shot him in the back of the head with a pistol.

Neither Webb nor anyone else in the packed saloon saw anything. Whoever the shooter was, he got away clean, despite the presence of men at every door. Joe Brown was tried for the killing in a show trial, with no evidence and a not guilty verdict.

Burt Mossman, the first head of the Arizona Rangers, and John Hughes (very likely the legendary Texas Ranger captain) were seated at a booth nearby. When a compatriot got up to take a look at Manny, either Hughes or Mossman said something to the effect of, “Sit down, we don’t want to get mixed up in this.”

Who could instill such fear (or apathy) into the hardened lawmen?

Manny’s brother-in-law would fit the bill. Although the shooting did not fit his modus operandi—he ambushed victims in secluded places, using a shotgun—he had already done one contract for Fall and company, why not another, especially if it would keep quiet his involvement in the Garrett murder? Miller, who got even with his enemies and got away with it, put fear into the hearts of even the bravest men.

We will probably never know. What is clear is that Manny learned an old lesson the hard way: dead men tell no tales.