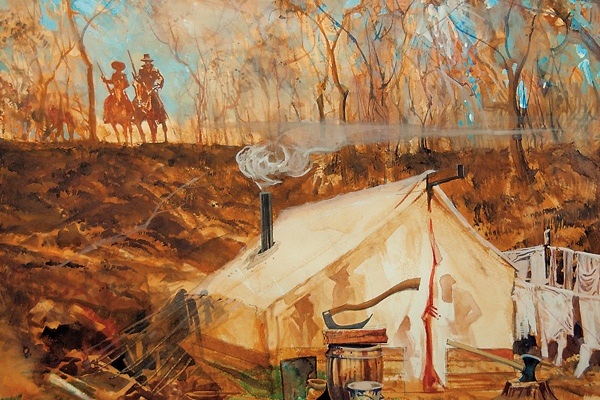 Working out of Fort Smith, Arkansas, Deputy U.S. Marshal Frank Dalton, is tracking a horse thief in the Cherokee Nation named Dave Smith. Dalton is accompanied by Deputy James Cole, who also has an arrest warrant for Smith for introducing whiskey in the Indian Territory.

The two track the suspect to a river bottom camp where they see a large tent and hear men, women and children eating breakfast inside. Both lawmen dismount and walk toward the tent on foot.

Dalton approaches the south side, and Cole, the north. Dalton opens the tent flap with his left hand, while holding his rifle in his right.

As he leans in, Lizzie Smith (wife of the horse thief) grabs Dalton’s rifle barrel and pushes it up. Startled, Dalton jumps back, as Dave puts down the kid he is holding, grabs a rifle and lunges out of the tent.

Dalton says, “Don’t shoot; I want no trouble,” but Dave fires point-blank, hitting the lawman in the chest. Deputy Cole, coming around from the other side of the tent, fires, hitting Dave in the back.

Everyone inside the tent comes busting out the tent flap as Cole, startled, backs up and trips over a tent rope. One of the men, Lee Dixon, fires, nearly grazing Cole in the chest. Lee’s wife, Jennie, grabs ahold of Cole’s rifle barrel to push it away, but Cole breaks free and fires, hitting Jennie in the chest, then Lee in the shoulder.

Joe and Elizabeth Pearson flee with their six-month-old daughter toward the woods.

Cole heads toward cover, running by Dalton and asking if he’s hurt. When he receives no answer, Cole takes cover behind a tree as bullets whiz around him. Cole empties his rifle, then hides deeper amongst the trees to reload. He hears two rifle shots.

Seeing Cole retreat, Will Towerly runs up to Dalton and puts two bullets in the lawman’s face (in one version, Towerly puts the barrel of his gun in the mouth of the lawman, who is pleading for his life).

Cole made his way back to Fort Smith for help, while Towerly takes Dalton’s rifle and flees. The bloodbath is over, but the killing is not.

A large posse returned to the scene later that day. Frank Dalton and Dave Smith were dead, as was Jennie Dixon.  Dave was buried near the tent.

In nearly a week, on December 3, lawmen tracked down William Towerly at his family’s farm near Atoka, Indian Territory, and killed him during a shoot-out.

Frank Dalton’s brothers, Bob, Grat and Emmett, joined the deputy marshal’s ranks, but Bob was soon fired for taking a bribe and amid rumors of cattle rustling, the other two brothers resigned. Bob and Grat died in the ill-fated dual bank robbery attempt in Coffeyville, Kansas, in 1892.

A decade after the Dalton fight, James Cole was convicted of manslaughter for killing a man during another arrest attempt.