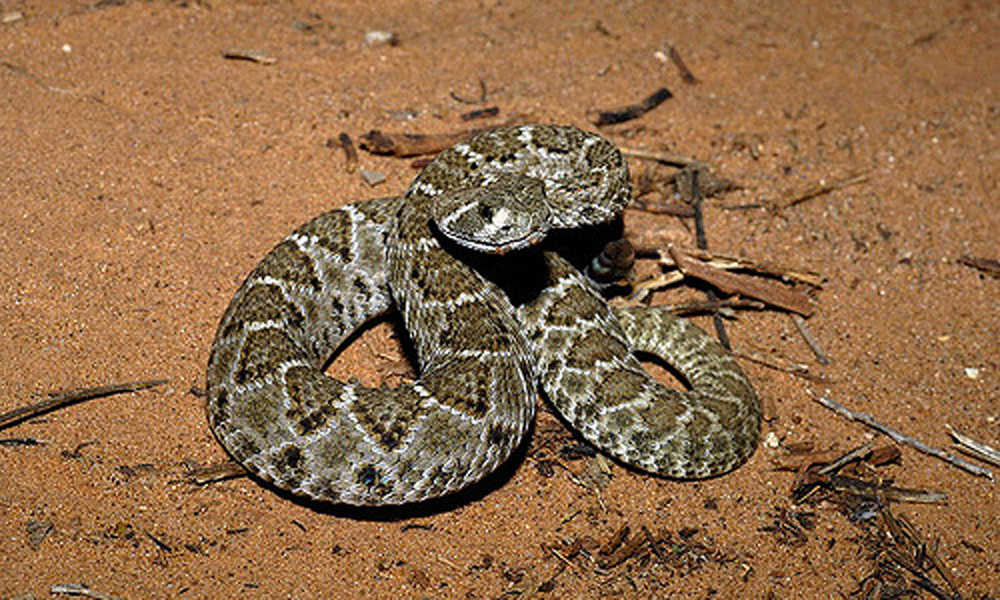 Arizona prides itself on having an abundance of eccentric. Bill Esenwein had to be somewhere near the top of the list. He was a desert rat, writer and prospector who made his home in the desert east of Congress. He earned the nickname as a result of his rapport with poisonous reptiles. He rescued them, took care of them and made them welcome in his home. Outside his cabin hung a sign, “Rattlesnake Haven.” His rattlesnake pet fetish earned him the name as the “Dr. Doolittle of Diamondbacks.”

Bill was a writer who’d traveled the world and found the quiet loneliness of the desert suited him. In one corner was his trusty typewriter and he believed the ratty-tat-tat it made when he was writing was what first attracted the snakes to his cabin. He thought the sound comforted them.

I searched high and low for a good photo of Bill and did come up with one in an old copy of a 1958 issue Desert Magazine but wasn’t able to make a copy. In the photo he’s holding one in each hand and another is draped around his neck. This is no tall tale; the camera doesn’t lie. In the absence of a photo of Bill, I’m posting one of his admirers instead.

The Arrowhead Restaurant at Congress had a zoo with a snake pit that was a popular stop along U.S. 89 for tourists traveling up to Prescott.

Bill frequently dropped by the zoo to complain that their rattlers weren’t getting enough nourishment so he’d go in the kitchen, mix some eggs and raw hamburger then climb into the snake pit and force give his slithery friends some nourishment.

The rattlesnake man’s crotalus atrox roommates also acted as burglar alarms when he was on one of his frequent sojourns into the desert. He laid his valuables on a table and the snakes would be shepherded into the room and corralled with chicken wire. Bill really didn’t need to worry. Only a fool would try to burgle a cabin protected by rattlesnakes. One, a particularly large old diamondback Bill affectionately called “Professor.”

Back in the days when Steve Allen hosted the Tonight Show, Bill was invited to appear on the show and did his snake handling demo without any protection. The audience was assured beforehand that Bill had never been bitten.

Bill always claimed he was never bitten but one day he showed up in Congress with a swollen hand and someone had to drive him into Wickenburg for treatment. He was furious when it was suggested the snake had bitten him on purpose but he reluctantly admitted one nailed him on the finger but Bill insisted the snake didn’t mean do it.

Last I heard, the old cabin still sits about a mile from the Octave Mine at Stanton and it’s still called “Rattlesnake Haven.”