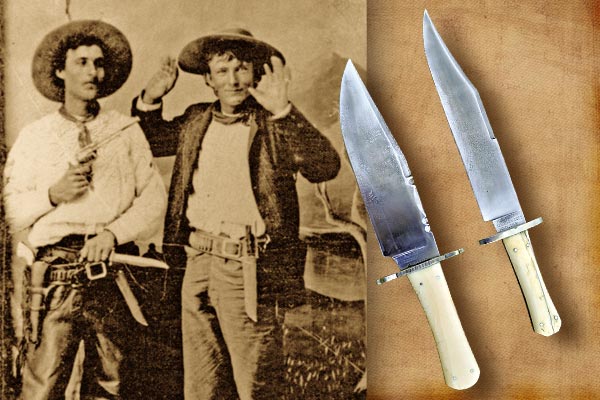 Regardless of whether a frontiersman carried a simple pocket-sized folding knife, a skinner, a camp knife or a full-sized fighting blade, he generally went “heeled” with some sort of cutting tool.

Most carried two or more knives—each for a specific purpose. However, of all the various types of knives used in the Old West, none has gained the fame and reputation of the Bowie.

On the frontier, any knife with a blade of seven or more inches in length qualified as a Bowie, although in actuality many had shorter blades. While some Bowie styles are still used today, most newly produced Bowie-type blades have been relegated to the status of collectibles, admired by history buffs for their graceful, powerful lines and decorative embellishments.

Although several commercial firms mass produce Bowie knives, along with those crafted by custom knifemakers, one bladesmith, in this writer’s opinion, ranks among the top-notch Bowie artisans today. In Whitefish, Montana, Bob Giles, better known to his amigos as “Cowboy Bob,” hand makes handsome, functional, 19th-century-style Bowie knives that give the appearance of having come from the finest collections of original Bowies.

Giles has been making museum-quality Bowie knives for decades and has been a multiple winner of True West’s “Best of the West” knifemaker award. Although he occasionally creates custom designs, Giles prefers working from old patterns and loves crafting Bowies and sheaths that look like genuine vintage pieces—albeit in excellent condition.

Using new circular saw blades salvaged from nearby sawmills, some of them measuring six feet across and a quarter-inch thick, Giles first cuts the blade shape from the saw blade stock. Once he cuts out the knife pattern, he removes excess material from the blade blank, thinning it to the proper thickness. This semi-finished blank is then tempered in an antique coal-fired forge, drawn at about 480-485 degrees Fahrenheit. This softens the steel, making it easier to sharpen, while also creating a more resilient blade. Each blade is then polished and given a bit of aging, along with the maker’s stamp reading “R.S. Giles, Mont. Terr.”

He generally crafts the knife’s guards and other details out of German silver, while he makes handles out of a variety of natural materials, including antler, bone, buffalo and cow horns, and ivory. The final phase of any Cowboy Bob Bowie is the sheath, which Giles hand crafts based on the specimens that fit the character of the knife.

I have handled dozens of Giles’s knives and own a couple in my collection, and I can tell you that each one is an exquisite example of the blade maker’s art. With the tariff on original 1800s Bowies running in the four-, five- and six-figure ranges, Giles’s edged weapons are a true bargain for any Old West aficionado.