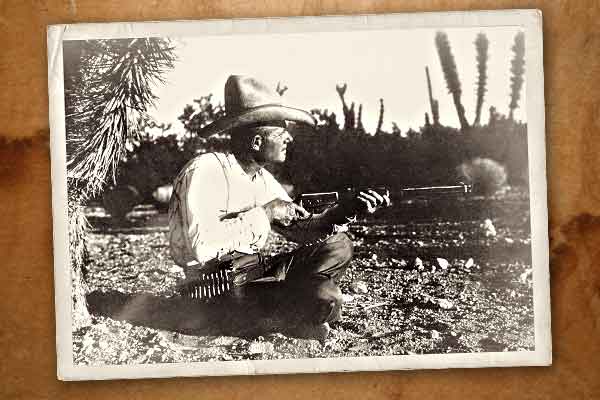 I first read about Tap Duncan when I was eight years old.

My parents gave me a book about Old West outlaws, lawmen and gunfighters (which I loved then and still do), and in a section about the Wild Bunch was the name Tap Duncan. He’d been mistaken for Kid Curry (or vice versa), which suggested Tap had run with a tough crowd.

His name stuck with me. But beyond that mention, virtually nothing has been reported on George Taplin Duncan. Yet, in recent years, his name has cropped up.

Tap was born near San Saba, Texas, in 1869. Among those he came to know during his formative years were “Black Jack” Tom Ketchum and his brother Sam (outlaws who became Duncan in-laws), Wild Bunch rider Will Carver and the “Tall Texan” Ben Kilpatrick and his siblings.

All of them had youthful run-ins with the law—from assault and battery to theft to rustling to you name it. Most of it wasn’t too serious, at least for Tap, until 1889. Four bodies were found in the Rio Grande, about six miles north of Eagle Pass. Dental records identified the victims as a family from San Saba. Witnesses had seen Tap’s older brother Dick riding with the four near the murder site; others stated Dick had offered to guide them to Mexico.

Tap and Dick were arrested. Tap was released, but Dick didn’t fare as well; he was hanged in 1891. Not long after, Tap, his wife and young child headed for southwest Idaho. His brother Jim did the same.

Tap may not have been involved in the multiple murders in Texas, but he proved deadly on October 15, 1894. He and Bill Hayes got into a contretemps in a Bruneau saloon. Hayes ended up dead with six bullets in him. A court found Tap had acted in self-defense.

Cowboying was Tap’s stock and trade in Idaho, yet he may have also made money by helping out his friends. Evidence proves his Texas pals and their associates (including Butch Cassidy, Sundance Kid, Elzy Lay and Kid Curry) came a calling—usually before or after a holdup.

Author Jeffrey Burton believes that Wild Bunch members spent time with Tap and his family around the time of the Montpelier bank job in 1896, and the Humboldt, Nevada, train stickup in 1898.

Then comes the Kid Curry connection. Curry—Harvey Logan—shot himself when cornered and wounded by a posse near Parachute, Colorado, on June 9, 1904.  As Mark Smokov details in his excellent book He Rode with Butch and Sundance, several people—including kinfolk of the Kilpatricks and Ketchums— identified the dead man as Tap. Apparently, Curry had been using Tap’s name as an alias. But lawyers, Pinkerton agents and other law enforcement officials positively identified the body as that of Harvey Logan—although that didn’t stop some folks from claiming otherwise.

But by that time, Tap and his family were ensconced in Arizona, where he seemingly had gone straight. He became a widely respected rancher in the Kingman area. Yet, as so often happens, this man of adventure met an ignominious end. In 1944, at the age of 75, Tap was run over by a car near Route 66 in Kingman.