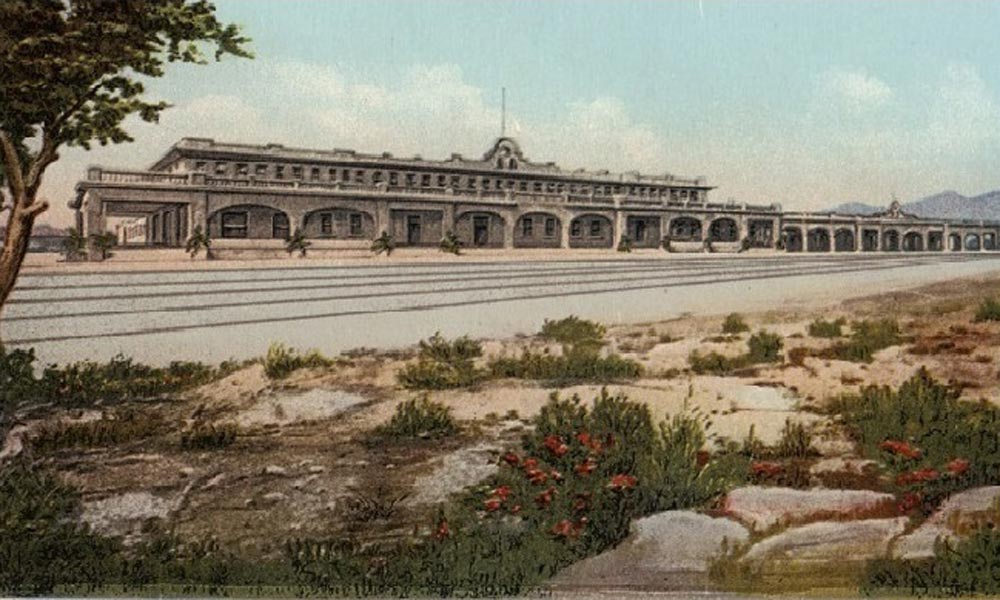 There’s nothing left to show for it today, but one time the Escalante in Ash Fork, Arizona was billed as the best Harvey House west of Chicago.

The name was in keeping with the Harvey tradition of naming their establishments after Spanish explorers. Silvestre Escalante was an eighteenth century Franciscan padre-explorer who first journeyed into Arizona in 1776.

The Atchison Topeka and Santa Fe began building its mainline west from Albuquerque in 1880 and by 1883 had stretched its steel ribbons across Arizona and was heading for California.  With the completion of the Santa Fe Prescott and Phoenix Railroad in 1895 the capital city of Phoenix was now linked by rail at Ash Fork with the Santa Fe Mainline.

Ash Fork is still central Arizona’s only direct link by rail to the mainline.

Before the days of railroad dining cars passengers were forced to eat in hash houses wherever the train happened to stop. The food was terrible and the service was worse. Passengers would place an order and just about the time the food arrived the conductor would shout “All Aboard.”

Meal tickets were sold to the passengers by the conductor and it’s likely he got a kickback on the meal tickets when the meal was not eaten. Thus, the same meal could be sold more than once. Not only were these conditions deplorable for passengers they were even worse for locals who had to deal with such conditions on a permanent basis. Travelers were at the mercy of the local restaurants and hotels. It took a gentleman from England named Fred Harvey to bring real cuisine to the American Southwest.

After experiencing some of the eating conditions along America’s rail lines Harvey approached the Santa Fe Railroad in the 1870s with the visionary idea of providing passengers with attractive surroundings, superior service and above all, good food. The railroad company accepted his proposals enthusiastically for food services had been one of serious problems plaguing all the railroads at this time. The Santa Fe agreed to build and supply the buildings along the line including shipping of food, furnishings and personnel, free of charge. In addition, Harvey was to receive all the profits from the venture. Evidently, the Englishman was not only a good restaurant man, but a shrewd bargainer as well.

The first Harvey House opened for business in Topeka, Kansas in the spring of 1876 and was an immediate success. French chefs were hired away from prominent restaurants in the East and paid handsome salaries. In at least one instance the Harvey House chef was making more money than the president of the local bank.

During the next twenty years, Harvey opened his Spanish-style restaurants and hotels at hundred mile intervals along the Santa Fe line from Kansas to the Pacific coast. It was said the Harvey Houses were spaced at that distance so they would keep “western traffic from settling in one place where Harvey served his meals.”

The Fred Harvey Company trained all its own chefs and the great majority were French and German.

In the early 1900s, one could be served a breakfast consisting of cereal, fruit, eggs atop a steak, hash browns and six large hot cakes with butter and maple syrup, topped off with apple pie and coffee for fifty cents. Dinners went for a quarter more and included a fancy gourmet dish or wild game.

Eventually Arizona would have five Harvey houses along the main line located at Winslow, Williams, Seligman and Kingman but the grandest of them all was Ash Fork’s Escalante, named for a Franciscan missionary and explorer.

Ash Fork’s first Harvey House was a wooden structure located on the north side of the tracks facing the Parlor House Saloon but on June 17th, 1905 a fire destroyed the depot, hotel, restaurant and water tower in the heart of the business district.  Railroad officials promised they would build a new Harvey House of steel and concrete much better than the original. After the fire the old depot, built with flagstone blocks were moved over to the north side of Route 66 and today is the award-winning Ash Fork Route 66 Museum.

In March, 1907 the luxurious Escalante, built at a cost of $115,000 opened for business. It was built in and “L” shape with a restaurant, with a beautiful crystal chandelier lighted dining room.  Silver, linen table cloths and crystal was used as table settings. No man was allowed to enter the dining room in shirt sleeves but the manager kept a supply of coats on hand as loaners.  An open balcony was extended along the front of the building and a covered screened porch stretched across the back.  The grounds were beautifully landscaped with fountains and flowers.  On the east side was a cactus garden.  A brick walkway lined the front of the building.  Along with the luxurious hotel, and restaurant was a newsstand, curio shop, barber shop and depot.

It wasn’t just the excellent food that attracted the people, especially men, to these Harvey Houses, the boss man added one more ingredient, the feminine touch. In a land where women were scarce, Harvey provided the Southwest with as wholesome a group of young women as had yet been seen in that region.

The Harvey Girls were recruited in the eastern part of the country through newspaper advertisements that read: “Young women 18 to 30 years of age, of good character, attractive and intelligent as waitresses in Harvey House Eating Houses in the West. Good wages with room and meals furnished.”

Career choices for women were quite limited in those days. For a young woman hoping to escape from the hometown doldrums or one with hopes of acting out some romantic role and adventure, the ad sounded like a dream come true.

They were a welcome sight to the lonely cattlemen, cowboys, miners and railroaders, not to mention, prominent single businessmen. Few stayed single long. Cowboy humorist Will Rogers quipped “Fred Harvey kept the West in food and wives.”

The turnover of help was never a problem as there was always a long list of applicants anxious to go west and become a Harvey Girl.

Harvey paid good wages, seventeen dollars a month and offered free room and board.  They had to be in bed at 10:30 on weekdays and 11:30 on Saturday. The dorms had house mothers to look after the ladies and keep the railroaders and cowboys from trying to sneak in or the girls from sneaking out after hours.  It was rumored however, that hidden in the vines, was a ladder leading up to the dorm.

The women signed a one-year contract promising not to get married until the contract was up but no sooner had she stepped down from the train and the marriage proposals came rolling in. “The pretty ones took about a day,” said one old-timer, “while the ugly ones took three days at most.”

A Harvey Girl could usually have her pick of the most prosperous gentlemen in town.  Harvey never held them to the non-marriage clause, in fact, like a proud father, he’d even throw a wedding party in the bride’s honor.

The turnover of help was never a problem as there was always a long waiting list of applicants anxious to go west and work as a Harvey Girl. It was said Harvey tried to hire plain-looking girls because they were more likely to fulfill their contracts. Also according to one observer, “the plain ones seemed to get in less trouble.

A familiar landmark since 1907, competition from roadside ventures along Route 66 caused it to close down it hotel operations in 1951.  Two years later the restaurant closed. Despite local resident’s efforts to save it, the stately Escalante was demolished in 1968.

In 1946 my father hired out as a fireman on the Santa Fe and we moved to Ash Fork. The War was over and Americans were on the move. Route 66 was still a narrow two-lane highway. Freight and passenger trains pulled by steam locomotives rolled through town daily.

The Escalante was the “Crown Jewel” of the town. People used to drive all the way from Prescott to dine there. During the Korean War my uncle built me a shoe shine box and when a troop train rolled in I earned a couple of dollars a day shining shoes for a nickel a shoe beneath those grand arches of the Escalante. It was a great place to be a kid in the early 1950s.