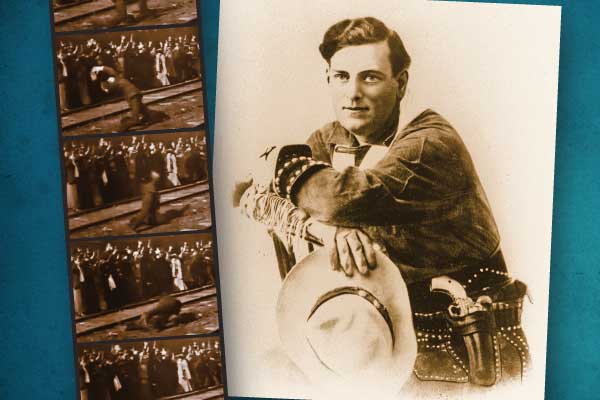 Arkansas native Max Aronson was in New Jersey in 1903, trying to angle his way into movie stardom.  Director Edwin S. Porter asked the 23 year old if he could ride a horse. “I was born on a horse,” he reportedly answered.

Then he tried to mount the animal from the wrong side, and the horse threw him off.

Life got better for Aronson, who appeared as three characters in that classic, The Great Train Robbery. Within a few years, he became the first Westerns movie star, often playing his trademark role of Broncho Billy Anderson.

Aronson, a cotton broker in Pine Bluff, Arkansas, got the acting bug around 1898.  He moved to New York—one of the centers of U.S. movie production—and switched his moniker to Gilbert M. Anderson.

After Porter’s silent Western, Anderson’s star rose. By 1905, he was also writing and directing films, as well as hauling equipment, among other menial gigs. Two years later, he and George K. Spoor formed their own studio, Essanay (as in “S” for Spoor and “A” for Anderson).

Around that time, Anderson read about a cowboy called Broncho in The Saturday Evening Post. He loved the idea of a hero in a series of cowboy movies, which he set up for his studio, casting himself as the star. The serial was a huge hit. Anderson, in real life and on screen, became known as Broncho Billy.

Over the next eight years, Essanay cranked out an estimated 375 Westerns, firmly cementing the genre in the American psyche. Anderson had a formula: he wrote a script for a 10-to-15-minute story, took a handful of actors and crew to a locale, shot for one day, then produced the package and distributed it to theaters. The one-to-two-week process cost roughly $800. By 1912, the Broncho Billy flicks were making $50,000 per production—and Anderson’s annual income was well into the six figures.

Just as impressive, Anderson developed camera techniques that became film staples—the close-up, the long shot, the reestablishment scene among them. You know those intense, up close shots of Clint Eastwood’s face just prior to gunfights in his Spaghetti Westerns? Sergio Leone owed the idea to Anderson.

Driven to make longer movies and try other genres, Anderson started hiring big-name actors, including Wallace Beery and Gloria Swanson. He put Charlie Chaplin under contract in 1914 (the two appeared together in 1915’s The Champion). Costs skyrocketed. Chaplin was getting $1,250 a week, on top of his $10,000 signing bonus.

Facing new contenders for the crown of “King of the Silver Screen Cowboys,” Anderson burned out on the pressure and sold his half of the business in 1916. His brief forays in film after that included a 1919 movie he produced that featured the first-ever pairing of comedians Laurel and Hardy, and his cameo appearance in 1965’s The Bounty Killer. He mostly stayed out of the movie business for the rest of his 90 years.

Anderson’s contributions to Westerns and movies were not forgotten. In 1958, he received an Honorary Academy Award for his pioneering efforts in the film industry. Every time you thrill to a John Wayne or Clint Eastwood Western, know this: Broncho Billy Anderson got there first.