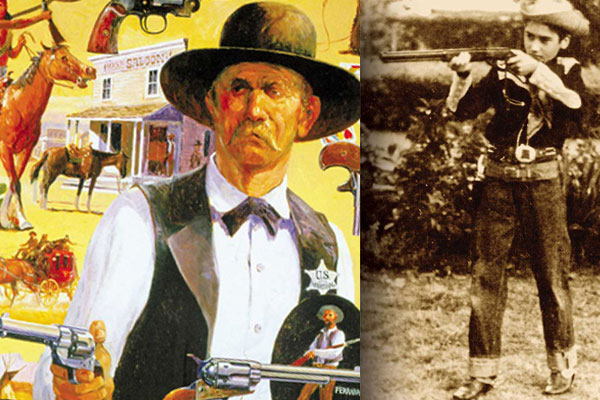 For firearms enthusiasts, the name John Bianchi is synonymous with quality gunleather, and for good reason.

He’s truly a living legend, having made gunleather rigs for the motion picture industry and for film stars who include John Wayne, Roy Rogers, Paul Newman and many others.

Space here doesn’t permit listing all of Bianchi’s accomplishments, but a few highlights would have to include his modest beginnings, over 54 years ago, as a southern California police officer  who built a part-time, 10-cent mail order catalog business  into the world’s largest holster manufacturer.

Holding more than 200 patents, trademarks and copyrights, Bianchi has become one of the most recognizable names in the firearms industry. As the founder and board chairman of Bianchi International, retiring in 1992, he designed, engineered and manufactured more than 40 million holsters, gun belts and accessories. He also personally led the design team that developed the M12 Military Holster, adopted in 1984 as the standard-issue military holster for the U.S. Armed Forces—the first new holster for the force in nearly 70 years.

In 1979, he established the prestigious Bianchi Cup Invitational Pistol Tournament, which he handed over to the NRA in 1985. He’s moved on to serve as a consultant on small arms, tactics and equipment to police departments. Those not fortunate to work with him personally can still benefit from his expertise: he’s the author of Blue Steel and Gunleather and the subject of a biographical work, John Bianchi, An American Legend:  50 Years of Gunleather.

A true patriot, Bianchi enlisted in the California National Guard in 1953 and retired in 1997 as a major general and commanding general of the California State Military Reserve. After the atrocities of 9/11, he was recalled and served his country until his retirement in 2004.

But even in the midst of his military career, he began servicing another passion of his—the Old West. He founded and served as director for the Frontier Museum Historical Center from 1981-86, assembling one of the most impressive collections of Old West firearms and memorabilia, which  became the nucleus of the present-day Autry National Center’s Museum of the American West in Los Angeles.

Because you are able to select from a wide array of styles and selections, choosing your own combination of design, finish and details, your custom gunleather is made just the way you want it. Each holster is wet molded to the actual model of the gun it will hold, and each rig boasts a hand rubbed finish that has become a signature of John Bianchi Frontier Gunleather.

In the tradition of the leather artisans of yesteryear, so as to assure customers of quality, bench made, one-at-a-time gun rigs, the company limits its annual production of holsters and belts.

A John Bianchi rig represents the finest example of the cowboy-gunfighter genre and is perfect for today’s cowboy action shooters, firearms collectors and Old West history enthusiasts. Anyone looking for a top quality gunleather rig is sure to find something in the Frontier Gunleather catalog that will suit your pistol. I know I did!