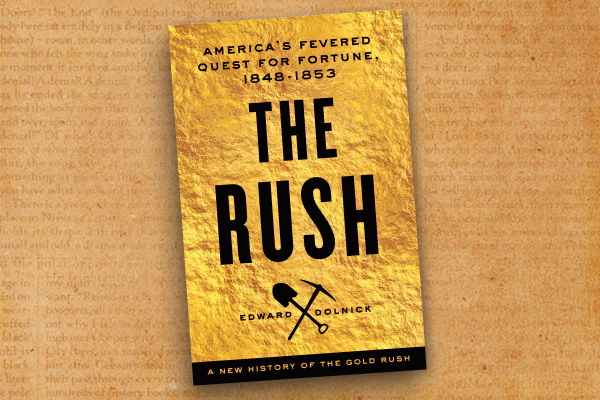 Before gold was discovered in January 1848 at Sutter’s Mill on the South Fork of the American River in the foothills of the Sierra Nevadas east of Sacramento, the European-American population of California was less than 10,000. A month later, Mexico signed the Treaty of Guadalupe Hidalgo ceding California and the majority of the American Southwest to the United States.

By the time President James K. Polk proclaimed California the golden state in his State of the Union address on December 5, 1848, the fever of the bonanza was about to shake the California Territory greater than any earthquake in history. In The Rush: America’s Fevered Quest for Fortune, 1848-1853 (Little, Brown and Company, $28), Edward Dolnick quotes President Polk declaring, “‘It’s true! All the rumors you’ve heard are true.’ Polk might as well have flung an arm in the air and waved a golden nugget for all to see.” Two years later, as California statehood was ratified on September 9, 1850, the 31st state’s population had grown tenfold, and within a decade had grown to 379,994. Forty percent of those treasure-seekers were foreign born—“triple the rest of the United States,” changing the nation—and its psyche forever. As Dolnick succinctly reminds the reader, “The story is set in America, and it is, in important aspects, the American story…America is the land of the self-made man who rises by virtue of luck and pluck rather than blood or birth.”

A former science writer at the Boston Globe, Dolnick expertly weaves the history, science and narrative biographies of five gold-seekers—three men and two women—into a well-focused and informative journey back to antebellum America and its struggle as a young industrial nation in which the Manifest Destiny policies of President Polk, the war with Mexico, immigration, epidemic disease and slavery would amalgamate in the 1840s and 1850s. This volatile mix would culminate in the Civil War—and prelude the second half of the 19th century and the rise of America as a world power.

Dolnick, who also wrote Down the Great Unknown: John Wesley Powell’s 1869 Journey of Discovery and Tragedy Through the Grand Canyon and The Clockwork Universe: Isaac Newton, the Royal Society, and the Birth of the Modern World, provides the reader with a first-person understanding of the chaotic life of a miner and settler in California during the gold rush. His strength as a historian is his ability to use the rich fabric of primary sources to weave a story of the hope, failure, tragedy and success of the past that resonates in the present.

Readers and historians seeking an accessible re-telling of the California gold rush will find Dolnick’s conclusions and research well-balanced, both with his five voices, and with his excellent endnotes and bibliography rich in newly discovered primary sources. While Dolnick could not have anticipated the current drought that is shaking the economy of the Golden State as it prepares to celebrate its 165th year of statehood in September 2015, he was very aware of California’s struggle to recover from the Great Recession and maintain its unique place amidst the stars of the flag, “where the end of the story has not yet been written.”  —Stuart Rosebrook