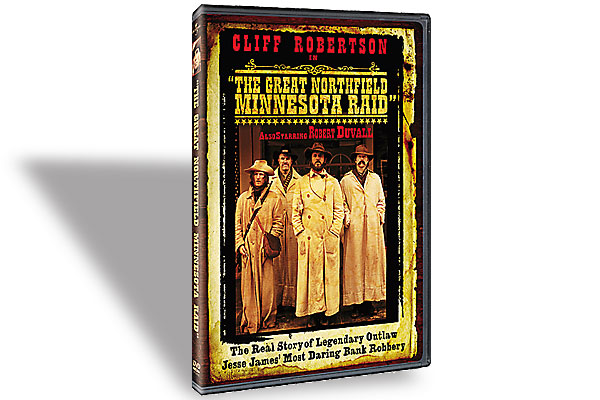 We can thank The Assassination of Jesse James for the long-overdue DVD release of Philip Kaufman’s brilliant James Gang movie, released in 1972.

Kaufman’s picture came along during the freefall period when Butch Cassidy and the Sundance Kid (1969), Leone’s Spaghetti Westerns, The Wild Bunch (1969) and maybe even Easy Rider (1969) tore down the old barriers, leaving the field open to hungry young filmmakers who’d been itching to try something different.

He pushed the James boys a bit to the side so he could center on Cole Younger (Cliff Robertson). He’s worldly—he’s a career outlaw after all—but he’s also a bit innocent, which is a tough sort of character to write. The picture is devoted largely to Younger, at large in Northfield, mingling with the financiers and politicians, even taking in a primitive baseball game while waiting for the rest of the gang to catch up.

Northfield, of course, was a disaster for the James-Younger gang. The only members not killed or captured were Frank and Jesse James. Yet Cole went to prison after the raid and wound up outliving them all, even Frank James, who became his business partner for a year.

It’s funny that what must have seemed at the time like a fairly radical and somewhat violent rethinking of the Old West and its legends now is an intelligent and genial farce. Of all the James movies, The Great Northfield Minnesota Raid is right up at the top.