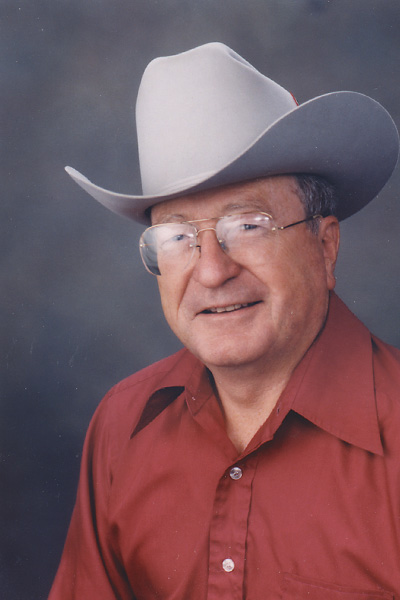 In 1995, Western Writers of America named Elmer Kelton “the greatest Western author of all time.”  Considering his competition—Owen Wister, Zane Grey, Louis L’Amour—that’s some accolade. In June 2002, Elmer received his seventh WWA Spur Award for The Way of the Coyote (reviewed July 2002). He has won so many Spurs for Best Western Novel, some members of WWA have nicknamed the honor “the Elmer Kelton Award.”

Ranger’s Trail, recently published by Forge Books, is his 40th novel. Nearly all are set in Texas, a place he knows like the back of his hand.

Elmer was born in Crane, Texas, and grew up on the nearby McElroy Ranch, where his father worked his way up from cowboy to general manager.  Although the pull of ranching was strong, Elmer “bowed to economic reality” and pursued a career in agricultural journalism.

During World War II, he served on a two-man bazooka team in Patton’s Third Army. According to Elmer, the Germans were retreating so fast, he “never got close enough to German Tiger tanks to have to fire that thing.” Having arrived in combat near the end of the war, he didn’t have enough points to be immediately rotated home. Instead, he was assigned to the occupation force, perhaps the most fortuitous assignment of his life. While stationed in Europe, he met Ann, an Austrian national, and the two of them fell in love. Because army red tape prevented the couple from marrying while he was overseas, Elmer had to return to Texas and enlist the aid of Senator Tom Connally before he could successfully jump through the bureaucratic hoops Washington had erected to slow the influx of GI brides. Elmer and Ann have now been married 55 years.

After earning a degree in journalism, Elmer worked as an agricultural reporter for the San Angelo (Texas) Standard-Times, editor of Sheep and Goat Raiser Magazine and associate editor of Livestock Weekly.  He retired in 1990.

He sold his first book, Hot Iron, in 1955. One of his most popular books is The Good Old Boys (1978). In it, cowboy protagonist Hewey Calloway is dragged kicking and screaming into the 20th century. The book is Elmer’s only novel to be made into a movie. Produced by Turner Network Television in 1995, it starred Tommy Lee Jones, Sissy Spacek and Matt Damon.

Because The Good Old Boys was so successful, Elmer wrote The Smiling Country (1998) as a sequel.  Authors often develop unusual relationships with their characters, and Elmer was no different. As he tells it, “About the time The Smiling Country hit the bookstores, I had a triple by-pass. In the book I had a bronc tear Hewey Calloway up very badly. As I was coming out from under the anesthetic, I began hallucinating. For a little while, I WAS Hewey Calloway, and the pain from that operation became the pain from what that bronc had done to me. Later I decided Hewey had gotten even with me for what I did to him in the book. Talk about fictional characters coming to life . . .”

Unlike some authors who write about the Old West, Elmer has no desire to have lived in the 19th century.  In his words, “I have often wished I had a window through which I could see the frontier era, but I have never seriously wished I could have lived then. . . .  It was a hard life . . . far from the romantic image many people harbor.”

Now 76 years old, Elmer has witnessed the demise of the Western genre in films and books. “There is no question that the Western’s popularity today is far less than 40 and 50 years ago,” he says. “I doubt that it will ever come back to its former popularity, but it is part of our American heritage. It has always changed with the times and will probably continue to change, adapting to readers’ interests and viewpoints.”

One thing is certain; as long as there are writers as skillful as Elmer Kelton, Western literature will never die. For that we can be thankful.