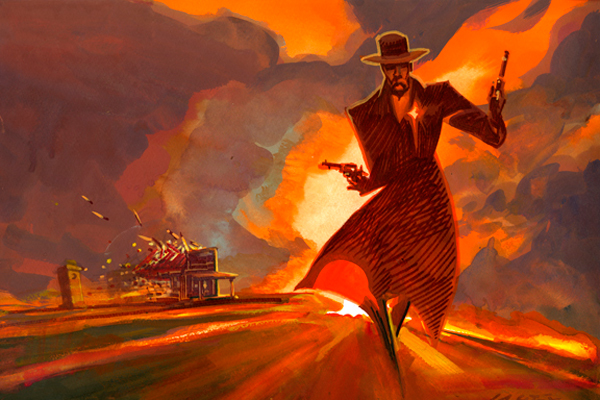 After Wyatt Earp’s death in 1929 and the publication of Stuart Lake’s book Wyatt Earp: Frontier Marshal in 1931, moviemakers finally began to nibble at the story (Western movies were in their third decade!) One of the first films to take a crack at the Earp-Tombstone story in the 1930s placed the gunfight at the “O.K. Barn.” The screenwriter or a producer apparently did not believe a corral was  dramatic enough for a showdown.

Other tweaks were made along the way, but once the formula was honed in, the floodgates opened and a bunch of people got rich on the story of the “flawless” lawman Wyatt Earp.

Hundreds of books have been published, some 40 movies have been made—so far—and several TV series aired about the legendary frontier lawman (in addition to ABC’s The Life and Legend of Wyatt Earp, audiences saw knockoffs, like ABC’s Tombstone Territory, which was Wyatt’s story in every way except in name, and, of course, Matt Dillon in CBS’s Gunsmoke is obviously based on Wyatt).

His story continued to be told in toys, a thousand magazine articles (many of them in True West) and even subdivisions with his name on them.

Yet the real Wyatt never received a dime for any of it. Doesn’t seem right, does it? On the other hand, Sadie made some major money, but that’s another story.