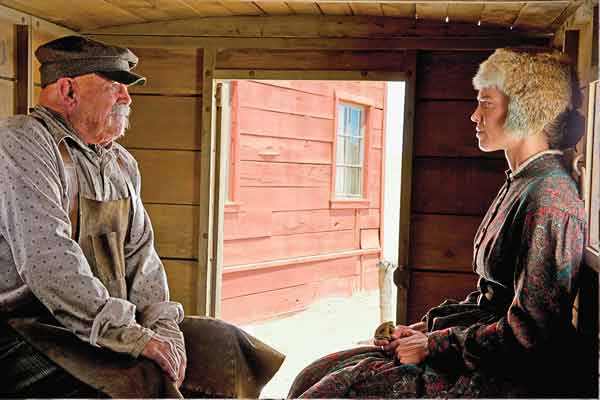 In February 1989, television history was being made with the CBS broadcast of Lonesome Dove. Adapted from Larry McMurtry’s Pulitzer Prize-winning novel, the miniseries shattered ratings and became a “water cooler” favorite. Lonesome Dove was the show to watch, and one of the reasons was luckless Deputy Roscoe Brown, portrayed with great heart by Barry Corbin.

“Well, Lonesome Dove was one where I’d read the book, before they were even thinking about doing the series. I told my agent I wanted to be a part of it, if it was ever done. The casting people

came to town and I was cast, and I was very proud to play Roscoe,” Corbin tells True West.

At 73, the Lamesa, Texas, native hasn’t lost a bit of his accent, or his self-effacing humor, after decades of success as one of film and television’s finest, and favorite, character actors.

Coming to Los Angeles in the late 1970s, after making his mark in New York  performing Shakespeare, Corbin found breaking into film and television difficult until he got the call to audition for a project called Urban Cowboy: “I went in wearing old jeans, worn out boots and an old hat. I read and didn’t think anymore about it. About two weeks later, they wanted me to meet John Travolta, and John said, ‘We’re gonna have a lot of fun.’”

Corbin chuckles at the film’s longevity, saying, “Why, I have teenagers—and they’re not as old as the movie—tell me Urban Cowboy is their favorite, so I guess it has some legs.”

Urban Cowboy was a mega-hit in 1980, and Corbin moved from one project to the next, without breaking stride, from the Dallas soap opera to 1983’s The Thorn Birds to 1983’s hugely successful War Games and a fine turn in Clint Eastwood’s excellent and underrated 1982 movie Honkytonk Man.

Years of excellent performances led naturally to Lonesome Dove, which would mark another milestone in Corbin’s career: his first collaboration with fellow Texan Tommy Lee Jones. They worked together again, in the Oscar-winning 2007 film No Country for Old Men, and this year, in The Homesman, with Jones directing from Shootist author Glendon Swarthout’s classic novel.

The Homesman is the story of George Briggs (Jones), a man hired to take a group of women back home to the East, after their frontier lives have left them mentally broken. The novel, which filmmakers have been trying to portray cinematically for 25 years, is stunning in its realism of the hardships women faced during the “Winning of the West.”

The novel was new to Corbin when he took on the role of Buster Shaver. “I hadn’t read the book when I did the movie, but I’ve since read it. Miles Swarthout [Glendon’s son] sent me a copy,” Corbin says. “I worked one day, and it was brief, but was a good experience. My scenes were with Hilary Swank, and I really admired her work. And of course, I’ve known Tommy for years, and I always like his work. So I’m pretty sure this is going to be something we can all be proud of.”

One scene can be enough, which was the actor’s experience on No Country for Old Men. “I’d read McCarthy’s All the Pretty Horses,” Corbin says. “My agent said I might not be interested in No Country for Old Men because it’s only one scene. I read it and found the character, and that scene is the heart of the whole movie, so I did it.”

Corbin was again working with Jones, who had doubts about the directing style of Joel and Ethan Coen: “I asked them, ‘Do you guys ever give direction?’ Because they didn’t say anything to us at all. They said, ‘If we cast it right, we don’t have to,’” Corbin says. “Well, that told me all I needed to know. Tommy and I were talking about it, and he said, ‘I don’t know about these guys.’ And I said, ‘I think they know what they’re after.’ That scene was his first scene to shoot, and my only scene, and that was an interesting deal.”

Corbin feels that directors who come from an acting background bring out the best in their cast. “They know how to talk to an actor,” he says. “There are so many people who came from a technical background, cinematographers and so forth, who don’t really know what an actor does. They don’t understand what we bring to it and think of us as kind of puppets. If you’ve acted, then you understand the contribution.”

This is certainly true of actor-director Jones and his guidance of The Homesman’s stellar cast, including Hilary Swank, John Lithgow, Hailee Steinfeld and Meryl Streep. The film’s reception at the Cannes Film Festival was excellent. The Homesman should be not only an important Western, but also one of the most important movies of the year, when it debuts in the U.S. this November.

Corbin laughs modestly about his contribution to so many fine films, but he’s proud that he’s breathed life into the literary characters of Larry McMurtry, Cormac McCarthy and now Glendon Swarthout. “Well, my purpose is to interpret what the author intended; that’s my job,” Corbin says. “And if I understand his intent, and sometimes I don’t, but if I do, and the characters are drawn so strongly as in these films, it’s pretty hard to go too wrong with it.”