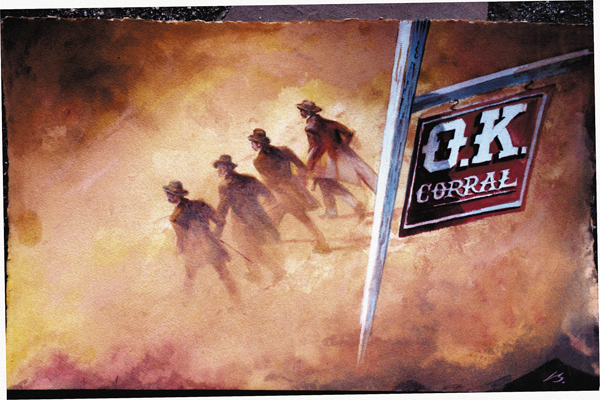 The shots heard ’round the world … the “Gunfight at the O.K. Corral.” Those shots still reverberate today in the world of politics, sports and gun battles in our modern neighborhoods.

The phrase “Gunfight at the O.K. Corral” has been shortened to just “O.K. Corral” and has become a ubiquitous expression found in newspapers from Asia to Europe and back to the U.S. where the gunfight actually took place. One doesn’t have to be a Western history buff to understand the significance of the phrase. Numerous books and movies have told the story of Wyatt Earp, Doc Holliday and the gunfight on the streets of Tombstone on October 26, 1881.

People of all ages are familiar with the street fight that lasted nearly 30 seconds in a 15-foot lot and left three cowboys dead, Morgan and Virgil Earp wounded, and Doc grazed. Included below are examples of how the modern press utilizes the O.K. Corral.

In a Pittsburgh Tribune Review article, published on October 16, 2005, and titled “Bashing Miers: It’s ingenuine [sic] considering the reality,” Heather S. Heidelbaugh reports, “The conservative establishment should seriously question whether it has the votes of the seven Republican members of the Gang of 14 senators who, in May, held hands with seven Democrat senators and signaled their unwillingness to have a conservative showdown at the OK Corral.”

George Bush is a target from Belgium when de defensa reports on October 7, 2005 (translated), “The Bush administration, facing any crisis, automatically reaches for its guns as if it were always poised at some eternal OK Corral.”

An article about an election in the Philippines in the Manila Standard, November 24, 2004, sports the headline, “Gunfight at OK Corral.”

The furor over choosing a new Supreme Court justice to replace Sandra Day O’Connor with Judge Samuel Alito resulted in the following quote of U.S. Senator Lincoln Chafee in the Pawtucket Times, November 1, 2005, “This is the showdown at the OK Corral.”

Sports is a favorite place to use the gunfight analogy. BBC Sport’s July 29, 2005, article by John May, “Lancashire relish shoot-out,” about the game of cricket, begins with: “Transplant the OK Corral to south London and substitute the Earps and the Clantons for Lancashire and Surrey.” Another cricket article from the United Kingdom refers to the gunfight at the O.K. Corral in a game between England and Australia.

One of my favorite modern usages comes from The Decatur Daily Religion, August 27, 2005, in which James L. Evans writes, “In Tombstone, the sheriff may go down to the OK Corral and shoot the bad guys before they get out of hand. But the vision of Jesus suggests that we try to overcome evil with good, not with more evil.”

Here is a new use of the gunfight analogy. This one refers to getting rid of spam, something that definitely did not exist in 1881. And again, we have the reference from our friends across the pond who had highwaymen but no cowboys. An article from ZDNet UK, referring to Internet security and the work done by Spamhaus, an anti-spam organization, quotes Ed Gibson chief security advisor for Microsoft UK, “It’s like the Wild West out there. It’s the O.K. Corral.”

Violence Old West-style is one of the more common usages of the gunfight scenario. On September 17, 2005, the News Journal in Wilmington, Delaware, reported in a story about a slaying trial that Deputy Attorney General Karin Volker said, “The city streets aren’t the O.K. Corral.” The statement was also made in closing arguments during a murder trial. Seems murder plus shootings in streets bring to mind Tombstone’s famous street fight. Mention of the O.K. Corral creates a clear mental picture in the courtroom.

The London Free Press of October 13, 2005, reports a story about a questionable search of a vehicle after the driver was found to be wearing not one but two bulletproof vests. The judge made a comment that the officers must have thought the suspect “might be going to the gunfight at the O.K. Corral.”

The O.K. Corral has clearly become a modern-day euphemism for verbal altercations, acts of aggression, real-time shoot-outs and competitive sporting events. News stories in Ireland, India, the Philippines, Indonesia and South America have referenced Tombstone’s famous shoot-out. Who would have expected that an 1881 gunfight on the dusty streets of a mining town would become an international motif?