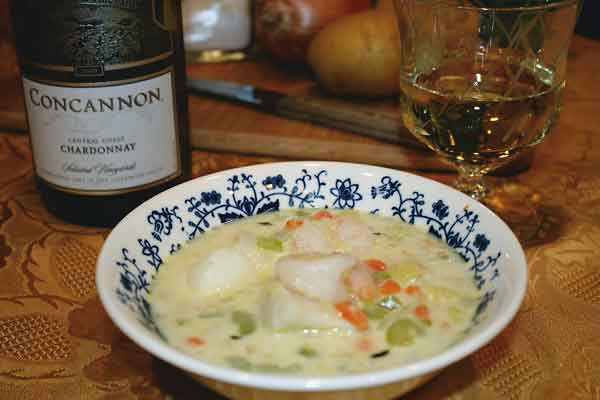 “Reader, when at the big hotels, call for the dish on the bill of fare called, ‘fillet de bouf et pommes de terre hachis a l’Hibernais,’ and you will get the hash of the kind known to the unlearned as ‘Irish stew,’” wrote The Oregonian in 1870.

Somehow the French version doesn’t sound as tasty as the Irish one. This Irish dish, however, only appeared as a novelty; it was not as frequent out West as was chicken fricassee or roasted venison.

As with most immigrants, the Irish brought their recipes with them. Since Ireland is an island, the food eaten there consisted of seafood, meat, potatoes and vegetables. The Irish learned to be frugal and thus, they developed hearty, yet economical dishes.

While the Victorian restaurant’s bills of fare often included Irish staples like lamb, mutton, salmon, beef, pork and potatoes, these weren’t prepared in the usual manner. Restaurant dishes were fancy, and diners paid for the luxury.

Yet many pioneers needed to be just as thrifty as the Irish had been in Ireland. Home cooks, boarding houses and public institutions served frugal dishes made with cabbage, turnips, corned beef, vegetable soup and Irish potatoes.

The Irish potato was the one dish that graced most Victorian menus as early as the 1860s. Texas was a large grower of Irish potatoes, but other states, like Colorado and Iowa, also grew them. Irish potatoes were surprisingly large—one could weigh in from one to five pounds!

Another Irish-influenced fare that graced the tables of pioneers and restaurants was Irish wine. Okay, technically, it was California wine, but made by Irish immigrants.

The Concannon family emigrated in 1865 and landed in Boston before heading west. James Concannon, the patriarch, was born on St. Patrick’s Day in 1847. His move to San Francisco in 1874 would prove he surely had the luck of the Irish!

Settling  in the mostly Spanish mission district, James often conversed with Archbishop Alemany who ran Mission Dolores. Sensing the unhappiness in James and his wife, Helen, the Archbishop said to James, “I know you have this family and want to improve yourself, so why don’t you get some land and produce Sacramental wine for the Catholic Church.”

James heeded the advice and bought 47 acres in Livermore in 1883. The Concannon family is still producing wine at the same location. John is the fourth-generation Concannon and the current winemaker, following in the footsteps of James, who he says “became one of the first to craft Bordeaux and  Rhône-style wines in California.”

Even more, the Concannons were the first Irish family to begin a successful winery. They were also the first to bottle the Petite Sirah grape as a single varietal in 1961.

The Concannons have shared with us the family recipe for Fisherman’s Chowder, which originated with the clan on the Aran Islands in Ireland. Enjoy it with a glass of Concannon Chardonnay. As they say in Ireland, “Sláinte!”