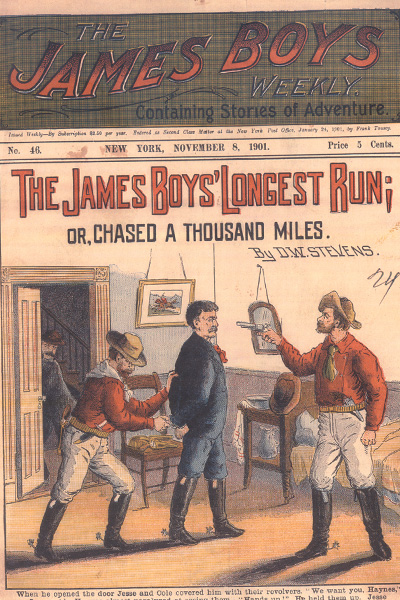 The ragged remnants of the James-Younger Gang rode south out of Northfield—six men on five horses. All of them were wounded (see sidebar, next page), and one had trouble staying in the saddle. Their guide, a local Minnesota boy named Bill Chadwell, lay dead back on Division Street. In his pocket authorities found a map; one assumes it was intended to show the way out of the state.

Up ahead, a thousand-man posse was forming (the largest in U.S. history). The outlaws were over 500 miles from home—two opponents for every mile. How poetic.

And then it started to rain—almost non-stop for two weeks. Posing as fishermen, cattle buyers and posse members, the robbers lied, bam-boozled and generally outsmarted their pursuers all the way to Mankato (see Walker map, next page). By then they were on foot, and after a posse jumped them at Minneopa Falls (barely escaping, the gang left behind clothing and half-eaten food), the James brothers decided to split off and make a run for it themselves. The Youngers were soon captured at Hanksa Slough (see Classic Gunfights, January 2002).

Jesse and Frank stole a series of horses and blew past every picket and double-guarded river crossing in their path. For over a month, their implausible, impossible journey held the nation in thrall with reports coming over telegraph wires from  Minnesota, Iowa, the Dakotas and Nebraska.

Of the eight original robbers, three were killed and three captured. Only two made it to freedom.

For over a century, the James boys’ serpentine route and their encounters with locals have been shrouded in myth and folklore. For the first time, and exclusively for True West, master researcher and author John Koblas helps us piece together the clearest, most comp-rehensive map yet of the longest ride home in the annals of outlaw history.