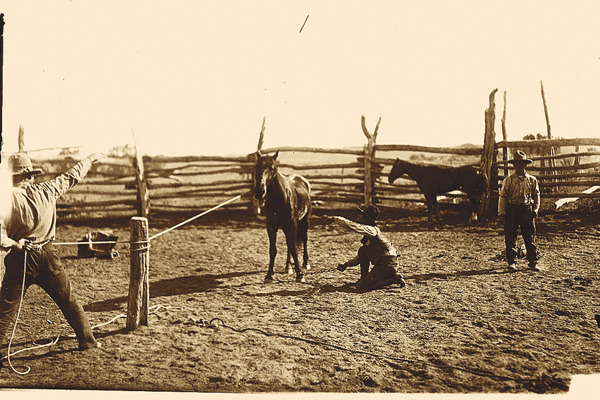 Perhaps the last thing that a bug-eyed tenderfoot will notice about a cowboy and his horse is the lariat. Yet, in this day of modern convenience, the cowboy still uses his rope daily.

No one seems to know exactly just when the lariat came into use, but biblical Abraham who “had cattle on a thousand hills” probably used ropes since it is impossible to raise cattle without one.

The Spaniards who brought the first horses to America introduced roping in 1519. They were quite proficient with the rope and passed their skill on to the Mexicans. “Lariat” is really a corruption of the Spanish la reata, meaning simply, the rope. The longhorn was also brought to America by the Spaniards. Eventually, a large part of Texas was stocked with what is now known as the Texas longhorn.

During westward expansion, the rope was used by the cowboy who chased wild cattle out of the brush to feed a growing population. As the cattle population in-creased, there was more need for the

cowboy and his lariat. When those larger herds were shaped up to trail the steers north in search of a range, or to be sold to a buyer at some delivering point, the rope was in great demand. Before starting, each steer had to be roped to have a trail brand put on it for identification in case the cow wondered off, the herd stampeded or mixed with another herd.

When a cowboy was riding around he might come across a cow that was having trouble giving birth. He would tie the cow, and pull the calf with his rope. Sometimes the animal would have a stick in its eye—it would have to be roped and the wound tended.

In Texas, many cattle were infested with screw worms. When I was foreman on a large ranch in Texas, I carried a bottle of screw worm medicine on my saddle at all times, and any time I saw any signs of screw worm infection I would rope the animal and doctor it right there. Often, a cow being corralled would dart between the riders and start back for their old range. They’d be brought back by driving them on the end of the rope.

On the old-time cattle roundups there might be over 100 horses put to use. The horse wrangler would run these horses in a V-shaped, rope corral. When the horses went into the corral, he would use a third rope to pull up and hold the horses while each cowboy roped the horse he was going to use. It would be too dangerous for a person to go in among the half-wild horses as he might be surrounded, crushed, kicked, or knocked down and trampled. You had to use a rope to get your mount.

Some historians claim that ropes as long as 105 feet have been used with a weight in the end of them. However, I favor about a 50-foot rope. It is said that Will Rogers used a hundred-foot rope in his stage act.

I have roped a lot and I don’t see how anyone can use a hundred-foot rope in ranch work. A man would have to use all the strength he had to throw it. I just don’t think a man can throw that much rope with any accuracy. Short ropes are for working bushy country, where you don’t have much room and less time to throw. The unbelievable “figure 8” which catches the forelegs in one loop and the head in the other was a fantastic feat few rope artists can do. I never could.

You might find some grizzled old cowboys that still talk about the incredible throw by some early Mexican cowboys in which a big loop is thrown hard at the back of the steer, and opens up to let its back in, then clears the head, but catches the forelegs spilling the critter. This was done on horseback at a dead run.

Back in the longhorn days, it was quite necessary to use a big loop to get it over the huge horns. The bigger the loop however, the more apt it was to catch the steer around the belly which was tantamount to shooting yourself in the foot.

Expert ropers who took pride in their work would have their ropes made for them by expert craftsman. Later, ropes were made of fiber, and today, mostly of  nylon. I guess I’m old fashioned as I still like the Manilla rope best. A famous California maker of ropes, since the early days, was the Ortega family. A few years back they were still making ropes—they may still be today. The Ortega family specialized in making ropes for fussy cowboys and rodeo stars. In the old days, the cowboys often braided their lariats from rawhide. They would use the hides of young heifers and make ropes during the quiet winter months when there was not much work to be done. The Spanish, the Mexican and Indian also made their ropes out of rawhide. They would stretch a steer hide on a level place and let it dry.  Then they’d cut a strand in a circle about a 1/4-inch thick on a bevel, the flesh side wider than the top side since the lower is much stronger. Cutting round and round, they continued until they got the strand the length they wanted. Then they would cut three more to match the first one. Fastening one end on something solid, they would scrape the hair off with a sharp knife. Next, they plaited the strand together.

The rawhide rope was the best throw rope, but not the strongest. A man could throw them against the wind. A rope, like wood, has a grain and will, cast one way; a cowboy had to use it that way only, or it would shimmy and backfire. It was stiff when new, and he would tie it between two trees and leave it stretched for a few days. Sometimes he would singe the tuft off. Only then would it behave the way he wanted it to. In cold weather some cowboys took their rope to bed to keep it supple for the next day’s work.

Beside cow work, a lariat had many uses in the West; it could pull cattle out of mud holes, rescue a drowning cowboy, or help free a chuck wagon stuck in a muddy rut. It could save a cowboy on foot from an angry steer, and bullwhip a snake to death as far as the rope would reach. The drag man sometimes had a buckskin “popper” spliced into the rope which he could crack several feet out to keep stragglers on the move. It was used to pull soggy women and children out of well holes and save cowboys suspended over cliffs. It was used to haul a load of wood to the campfire, or help put out a grass fire by pulling a drag—sometimes a deliberately killed, bloodied steer.

A rope could not stand up against a gun in a fight, but if he caught his adversary unaware, he could drag him over the lumpy ground for a spill.

Some cowboys hunted with a rope. There’s been wolf bear, mountain lion, and any number of animals caught with one.

And perhaps the most dreaded use of the Western rope was to dangle taut over a tree limb, as Judge, jury and executioner of the West, tried, sentenced and executed the felonious character with one handy, inconspicuous, life-saving or life-taking device—the lariat.

Thomas LaMance is a freelance writer who worked as a cowboy since he was 13, and served as a federal live-stock inspector for 12 years. This is his first article for True West.