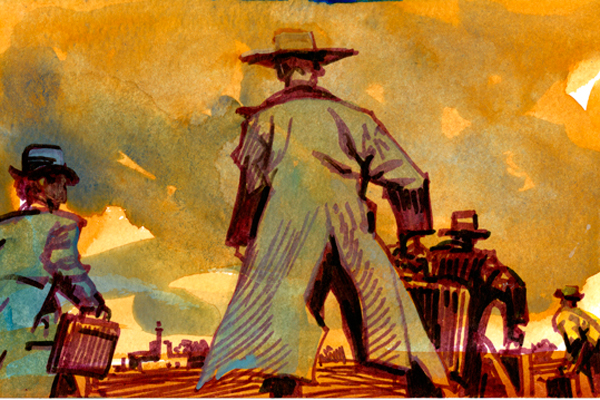 Four outlaws stepped off the train. They were ready for a showdown, but High Noon was decades away. The lazy squeak of a distant windmill a reminder that they had reached California and the end of the line. The four had ran as far west as they could in a bid to escape old ways and Thomas Edison. Especially Edison.

Starting in 1908, Edison led a gang known as the “Trust.” He and his East Coast cronies controlled the fledgling movie industry by owning all the projector and film stock patents in the United States.  You couldn’t show a film without their permission and more importantly, paying them large fees.

Plus, Edison and his gang hated films from France, the birthplace of cinema. They didn’t want France’s “star system” to invade our shores, so they banned anything they didn’t like or that they didn’t think Americans should see. That turned out to be quite a bit.

The outlaws who got off the train in Hollywood, CA liked the sleepy town because of its proximity to Mexico. If hired thugs from the Trust showed up, the four could load their sets and equipment on trucks and head south. Even the questionable legal practices of Edison couldn’t reach them there. In no time, the town was filled with riffraff and ruffians, con men and criminals.

Wyatt Earp fit right in, but in the next issue of True West we tell the untold story of how Wyatt Earp got ripped off by outlaws in the last outlaw town.