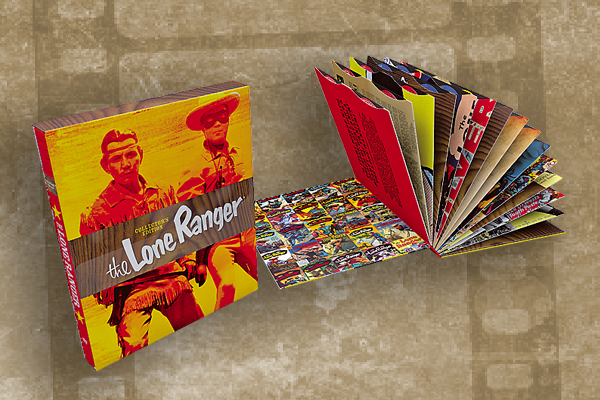 This summer’s Disney mega-production in no way resembles the show with Clayton Moore. Those being introduced to the Masked Man through the new film will likely find these adventures prehistoric. Yet anyone looking for a time capsule that honors the original TV series and the Ranger in his many incarnations, this compilation is a treasure trove.

To many, Moore remains the Lone Ranger, as Jay Silverheels remains Tonto. This Collector’s Edition honors these icons, by including all 221 half-hour episodes of the series, beginning with the first black-and-white seasons. Transfers are excellent, but these do appear to be later versions compressed for time.

Filled with stock footage and moral lessons, the episodes are great fun and feature guest stars DeForest Kelley, slimy James Griffith and Bela Lugosi’s Monogram costar Minerva Urecal, along with a who’s who of classic Western actors. Let’s never forget Glenn Strange, as Butch Cavendish, who ambushed the Texas Rangers, leaving one lone lawman alive. Big mistake for him, but great for kids glued to their Electromatic sets.

The set also comes with an informative booklet, an early comic reprint, the original radio show and an episode from the 1966-69 animated series. This set is only the tip of the Lone Ranger iceberg, but as an introduction to the Masked Man or a step back in time, it’s recommended.