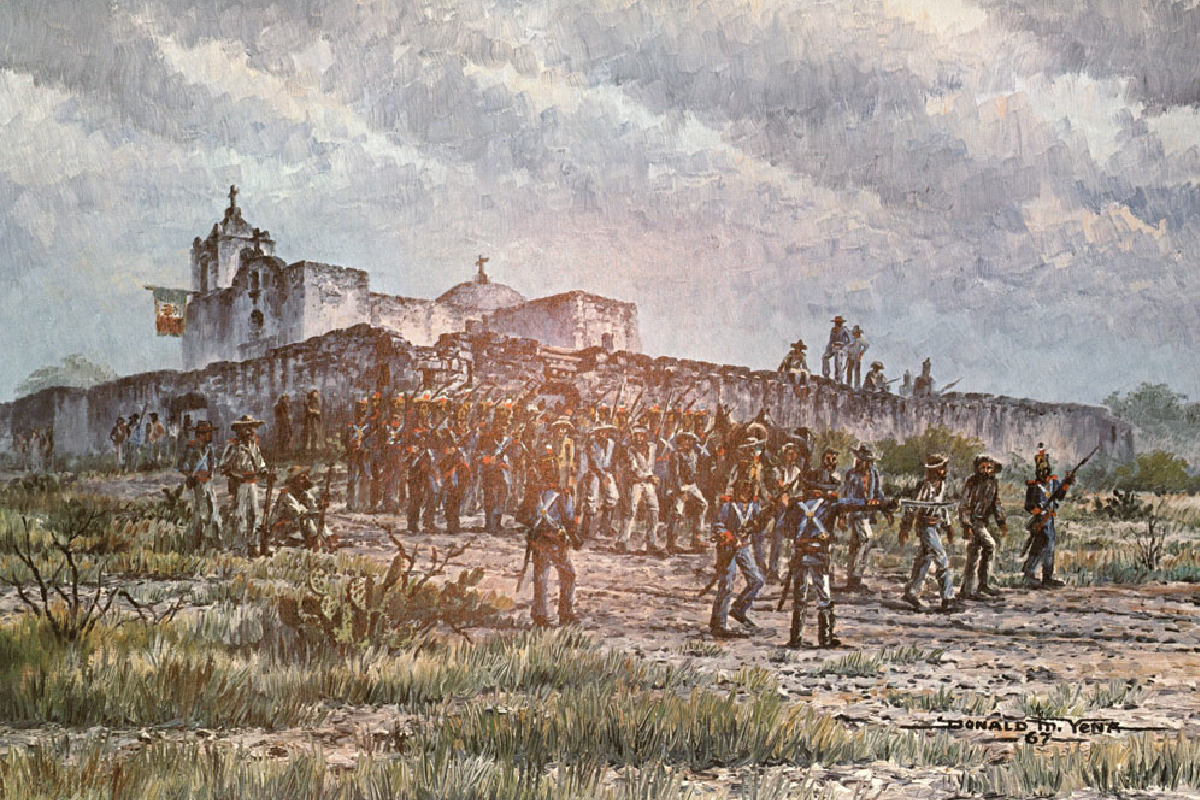 Soon after Antonio Lopez de Santa Anna became President of Mexico in 1835, he overthrew the Constitution of 1824 and declared himself dictator. Believing the restive Texians would use his rise to power as an excuse to secede from Mexico, he ordered his soldiers to disarm them. He had no tolerance for dissent. In the spring of 1835 his soldiers cruelly ravaged Zacatecas in north-central Mexico. Then he turned his attention to Texas. In September 1836 he dispatched General Martin Perfecto de Cos to San Antonio with 300 to 500 troops.

On October 2nd, 1835, when Mexican soldiers attempted to retrieve a cannon, they had provided to the citizens of Gonzales to defend against raiding Comanche. Instead of surrendering the gun the Texians hung a banner that read “Come and Take it.” The soldiers realizing they were outnumbered, retreated to San Antonio. The Texians and Tejanos followed up their victory at Gonzales by driving the Mexican Army out of San Antonio and south of the Rio Grande.

Santa Anna was livid and branded all dissenters, pirates. He vowed to crush them and take no prisoners. In early 1836 he led an army of some 7,000 soldiers across the Rio Grande into Texas.

Fannin needed a means of transport and had sent some men to Victoria, to bring carts and 20 yokes of oxen. On March 19th, Fannin led the Texians on a retreat from Goliad. Fannin’s delay proved costly.

Transporting nine cannons and more than 500 spare muskets, Fannin’s forces were also heavily laden with supplies and baggage. The column had traveled about 6 miles when he ordered a halt to rest his animals. At about 3 pm, a General Jose de Urrea’s cavalry appeared. The Texians immediately formed a hollow square with their wagons and cannon placed in each corner for defense as the Mexicans attacked.

Following fierce fighting, the Mexicans lost about 100 to 200 killed and wounded; Texian losses were seven to nine killed and 60 wounded. Facing overwhelming odds, though, Fannin and his troops surrendered the next day.

The Texans were taken back to Goliad, where they were held as prisoners. The terms were, they would be paroled returned to the United States. General Urrea left Goliad, leaving command to Colonel Jose de la Portilla. Urrea wrote to Santa Anna to ask for clemency for the Texans. On March 26th, Santa Anna ordered Portilla to execute them.

On Palm Sunday, March 27th,1836, while the sick and wounded remained in the chapel, the remainder of Fannin’s army were taken to what they were told was to gather wood. About a half-mile from the chapel the guards opened fire. Those who escaped the gunfire were butchered with bayonets. The sick and wounded were also executed.

Fannin was the last to be executed, after seeing his men killed. He was taken by Mexican soldiers to the courtyard in front of the chapel, blindfolded, and seated in a chair (due to his leg wound from the battle). He made three requests: He asked for his personal possessions to be sent to his family, to be shot in his heart and not his face, and to be given a Christian burial. The soldiers took his belongings, shot him in the face, and burned his body along with the other Texans who died that day. The bodies were also burned in the same manner as the Alamo. The charred remains were left unburied for the vultures and coyotes. Three months later what was left of the remains were found and given a formal military burial. The whereabouts of the burial ground was lost for years until a group of youngsters found some bone fragments. A monument to Fannin and his men was erected at the grave site in 1938.

There were nearly 350 murdered at Goliad almost twice as many as those lost at the Alamo. Twenty-eight soldiers managed to fake their deaths and escape.

There would have been more had it not been for a Mexican woman Francita Alavez who is remembered as the “Angel of Goliad.” She persuaded the Mexican commander to spare the lives of some 20 doctors, interpreters and orderlies.