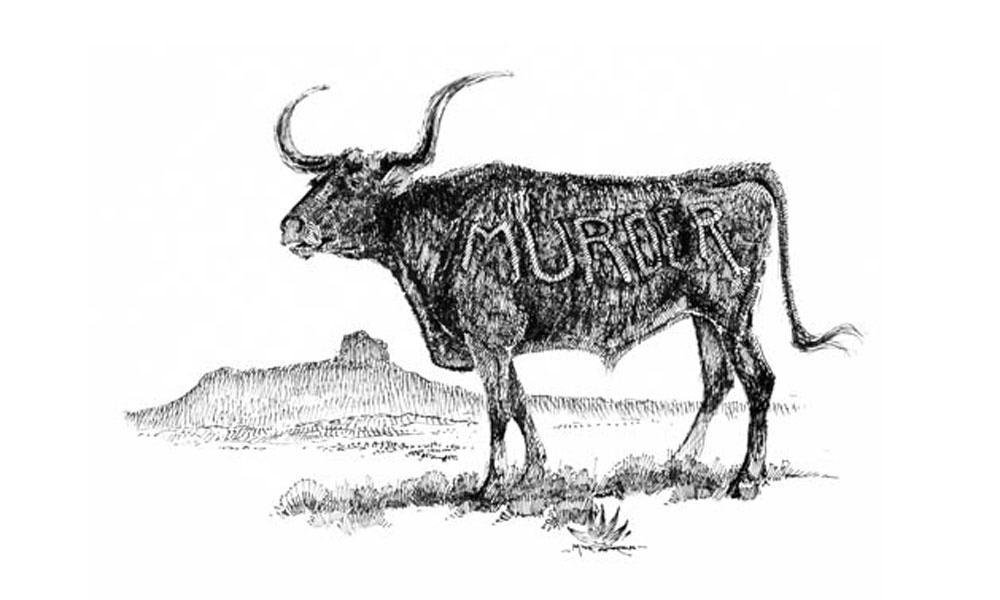 For many years Texas folklorist J. Frank Dobie regaled his students with Texas history at the University of Texas at Austin. He was a prolific author with books on Longhorns, Rattlesnakes, Lost Mines, Mustangs, Vaqueros of the Brush Country, Coyotes and a host of others. One of my favorites of his Texas tales is the true and tragic story of the “Murder Steer.”

It all began during an early round up in Brewster County in the Big Bend country in southwest Texas during the 1890’s. The open range cattle were gathered in the fall and each outfit sent a representative, called a “rep” to the roundup to see that the unbranded calves were marked properly. The cowmen elected someone respected by all as roundup boss and he acted as judge in any dispute. Sometimes the mother cow didn’t survive and the round up boss usually determined which brand to stamp on the calf.

In January, 1890 the small outfits held another roundup to brand the calves that had escaped the fall roundup.

The biggest outfit in the region, Wentworth and DuBois considered the little cow outfits as parasites who got their start by stealing calves from the big ranches. They arrogantly believed every questionable calf belonged to them and they sent a gunfighter named Fine Gilliland as their rep to back their claim and intimidate the small outfits.

The notorious Mannie Clements was also present that fateful day. Clements was a cousin to John Wesley Hardin and related by marriage to the “Killin” Jim Miller, a noted assassin.

A motherless brindle bull calf, was claimed by a one-armed Confederate veteran named Henry Powe, a mild-mannered man, who was not considered contentious.  Everyone, including the roundup boss agreed the calf’s mother was wearing Henry Powe’s HHP brand. Everyone that is, except Fine Gilliland, who rode up and asked Powe’s young son Bob if the brindle bull’s mother was in the herd.

The boy replied “No, but the boss told Father it belongs to an HHP cow.”

“He’ll play taking it unless he produces the cow,” Gilliland snarled as he separated the bull calf and drove it back to the main herd.

Henry Powe was with the main herd and saw the calf coming, followed by Gilliland. Words were exchanged between the two men but none of the cowboys were close enough to hear.

Gilliland rode up and tried to rope the calf but missed. Powe pulled his pistol and fired a shot at the calf and he too missed.

Gilliland dismounted and dropped to one knee, drew his weapon and fired. Several gunshots were exchanged between the two at close range and when the gunsmoke cleared Henry Powe lay dead on the ground.

Gilliland took Clements horse and rode away in a hurry.  Henry’s son Bob, rode over to Alpine to notify the Texas Rangers. A few days later Brewster County Deputy Sheriff Thalis Cook and Ranger Jim Putnam came upon a stranger. When Cook asked if he was Fine Gilliland the man drew his pistol and fired hitting the deputy in the knee and killing his horse. Putnam dismounted, pulled his Winchester and calmly waited for Gilliland, who was hiding behind the fallen horse, to give him a target and when he did the ranger shot him between the eyes. The canyon where it happened is named Gilliland Canyon.

No one wanted to claim the motherless calf. In shock and remorse the cowboys drug the calf to the fire and branded “Murder” on one side and the date of Powe’s murder, “January 28” on the other.

The bull wasn’t earmarked nor castrated. It was loose on the range to fend for itself. The outcast steer roamed the plains for years. Stories of the “Ghost Steer” began to spread across the Texas ranges and it was said he brought bad luck to anyone who crossed its path.

As time went by the legend of the Murder Steer grew. It was said the “Ghost Steer” grew huge and mean, its eyes a bright red as it searched the ranges looking for the cowboys who marked him with that ominous brand. One story says one night a bunch of cowboys were sitting around the Wentworth and Dubois bunkhouse when one looked at a window and saw the red-eyed steer staring straight at him. The next day he had a tragic accident and died.