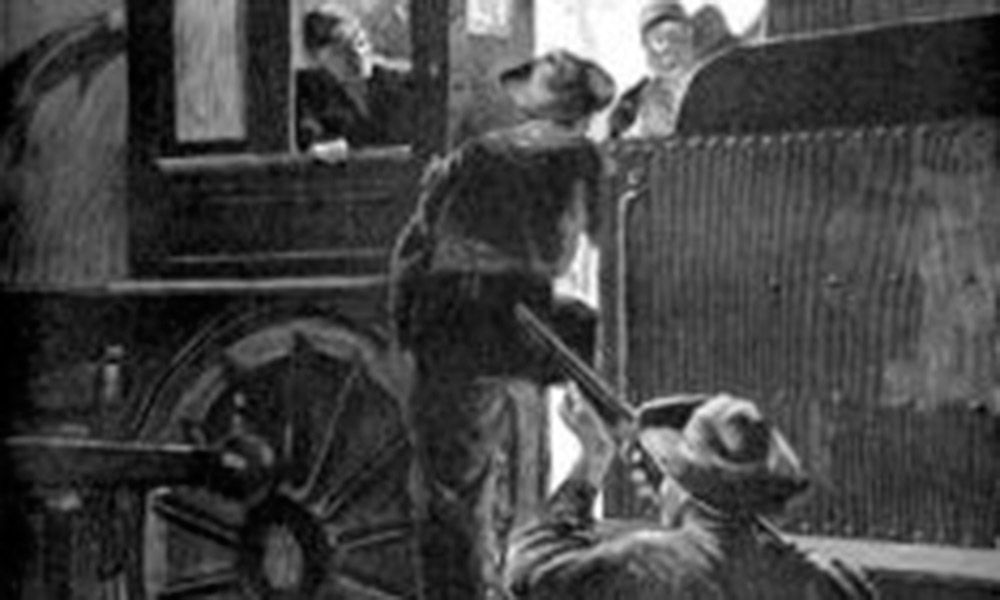 Between 1884 and 1922 the Southern Pacific Railroad was robbed nine times in Arizona.

The first one occurred on April 27th, 1887 when bandits, led by J.M. “Doc” Smart, flagged down the westbound near Pantano Station, a few miles southeast of Tucson. They fired a few bullets into the boiler then separated the engine and express car from the passenger cars then ordered the engineer to take her a couple of miles on down the tracks.

Meanwhile, the Wells Fargo messenger, Charlie Smith, took $5,000 from the safe and stuffed it into a cold pot belly stove. The bandits entered the express car and found only a few dollars.

One of the gang members knew how to run a steam engine so they left the fireman and engineer and chuffed off towards Tucson.

Later a search train was sent from Tucson to find the late train. They found the engine and Express car in the desert a few miles from town. But there was no sign of the train robbers. Further down the tracks they found crew and passengers.

They brought in Tohono O’odham Indian trackers who tried to cut a trail. Several posses scoured the country but the bandits seemed to have vanished into thin air.

Doc Smart and his band struck again on August 10th, same train, same location and the same Wells Fargo messenger. This time when the boys entered the express car one of them pointed the business end of his pistol at the messenger and muttered, “Smitty, that stove racket don’t go this time.” It seems the newspapers extolling the clever way Smith outwitted them in the previous robbery. Outlaws read newspapers too.

This time the gang made off with several thousand dollars. A posse picked up their trail and followed it into the Rincon Mountains to a small cave the bandits used as a hideout previous to the robbery. They found a canvas sack containing $1,000 in silver Mexican pesos, some jewelry, coins and clothing. The trail then led to a larger cave known as Five-Mile Cave. Years later the name would be changed to Colossal Cave and become a popular tourist attraction.

While lawmen were scouring the Arizona Territory looking for the train robbers they were living it up in El Paso.

On October 17th, 1887 two of the gang members, Kid Smith and Dick Meyers, robbed another train near El Paso. The boys should have quit while they were ahead. This time the quick-thinking Wells Fargo messenger, Chet Smith, outwitted them, shooting and killing both.

Some smart detective work rounded up the rest of the gang in El Paso. One of the bandits spilled the beans on how they mysteriously vanished. They had ridden the train into the outskirts of Tucson, put it in reverse, jumped off and walked into town. While posse’s searched southern Arizona the boys were enjoying the hospitality of the Old Pueblo.