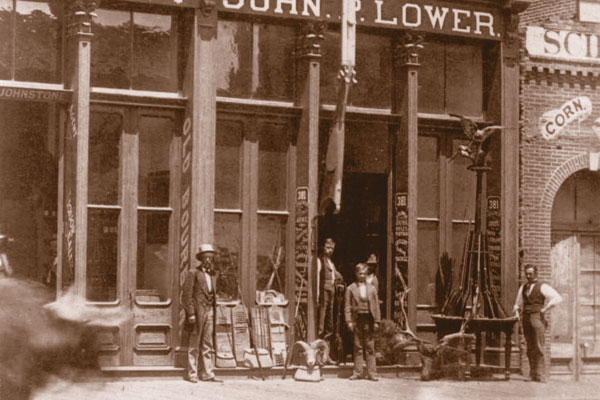 Often referred to as the “English Model,” the 1877 Sharps was the last of the company’s sidehammer rifles and is considered by many as perhaps the most graceful exposed hammer rifle ever produced.

Originally designed in 1876 by Charles E. Overbaugh, a Sharps exhibition shooter and the firm’s chief traveling salesman, the model was the result of Overbaugh’s acute understanding of the needs of target shooters at Creedmoor, the National Rifle Association’s shooting range that had opened in New York three years earlier. Creedmoor competitors complained that Sharps’ 1874 Long Range Rifle’s lighter weight barrels “whipped” when fired and produced too much recoil, when the preferred 105-grain powder charge and 520-grain lead bullet were used for the 1,000-yard targets. Overbaugh, himself a competent gunsmith, redesigned the ’74’s action, which preserved the regulation Creedmoor 10-pound weight limitation and allowed for a heavier barrel, thus giving much better accuracy at the 1,000-yard range.

These first guns were actually nothing more than 1874 rifles with ground down receivers and other weight-reducing features to facilitate Creedmoor shooters’ needs. In all, 25 such guns were produced and were shipped to N. Curry of San Francisco, California, in May 1878, as “Model 1877 Long-Range Number 1 Rifles.”

Through experimentation and redesigns, the true 1877’s sleek, more rounded, lighter receiver and breechblock, along with its graceful English-style sidehammer, were finalized and the gun was put into production in late 1876. Although at Sharps’ manufacturing facility the .45 caliber guns were first known as the “O” Model, or the “Overbaugh Long Range,” the gun was publicly advertised as the “Model 1877.”

As a rule, ’77’s exhibited better workmanship, finish and wood stocks than found on the earlier ’74s. Lockplates and barrel blanks were imported from England but were finished, with the barrels rifled and stamped, at the Sharps factory in Bridgeport, Connecticut (although some specimens exist still bearing British proof marks on the barrels). A number of the ’77’s hammers were acquired from E.S. Harris, a New York Sharps agent and sporting goods dealer of the period.

Generally speaking, the 1877 model was a limited-edition arm, originally intended as a ready answer to sportsmen’s needs while the factory geared up for production of its hammerless Model 1878 “Sharps-Borchardt” rifle. Only a couple hundred Model 1877 Sharps were ever produced. Of these, 75 guns, called “Special Model 1874s” by the Sharps Co., were sold to Denver, Colorado, dealer J.P. Lower in 1880.  These were sold as “Business” and “Sporting” rifles. Twenty others were shipped from the Sharps Rifle Co., as parts, and were custom finished in C.E. Overbaugh’s own shop in New York City, eventually being sold to another New York dealer, Homer Fisher, who in turn vended most of them locally to dealers. Most of these rifles went to New York-area Creedmoor shooters, with very few going to Great Britain. So this rare and beautiful so-called “English” model wasn’t really a British gun after all.