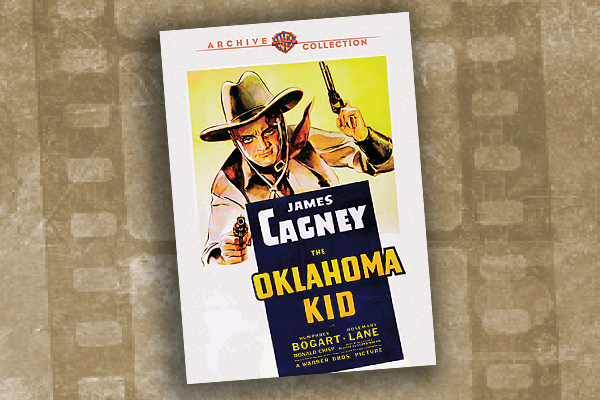 The mention of the amazing sight of James Cagney and Humphrey Bogart snarling at each other from under 10 gallon hats, holding six-shooters usually draws a “You’re kidding!” from people who have never seen the 1939 film, but this newly mastered release from Warner Archive offers a chance for rediscovery.

Always at war with Jack Warner over roles, Cagney loved the chance to ride west, and his pugnacious personality fills his role as the Kid, strikingly different than the usual laconic Westerner. Cagney’s character airs views about the treatment of the Indian tribes that give the Western an additional layer of authority.

But The Oklahoma Kid’s concern is action, with a superb land rush sequence, huge brawls and that famous 1930s Warner Bros. energy. Cagney even warbles “I Don’t Want to Play in Your Yard” before he socks the ever-present Ward Bond for interrupting him.

During all of this, Bogart, dressed in black, makes plans to take care of the Kid. You can’t help but smile to see Bogie so out of place, although he’s miles ahead of his performance as the Mexican gun runner in 1940’s Virginia City.

The Oklahoma Kid is fast-paced fun, filmed when Warner Bros. was at its legendary best. This Western is a hoot.