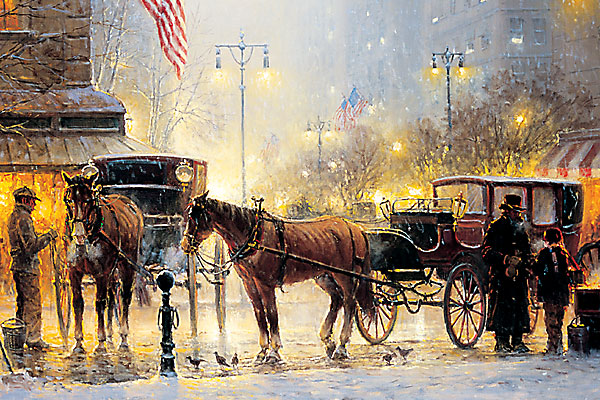 One, the Ohio-born Joseph Henry Sharp, heralded from the second half of the 19th century, known as the Positivist Age. It was a time when people believed knowledge from the sciences would solve all human problems. Painters reflected this by rejecting the Romantic subjectivism for the Realist: an objective portrayal of the observable world. Henry first brought New Mexico to life upon visiting the pueblos in 1883. He eventually rose to fame as one of the founding members of the Taos Society of Artists.

The other artist, Clark Hulings, is a Spaniard born during the 20th century and still sharing his art with us to this day. When Hulings moved to New Mexico, the brilliance of its sunshine brought back impressions of his Spanish childhood and led him to begin painting in the 1940s. His focus encompasses the Southwest.

Such realism was the high sell for the Altermann Galleries auction on October 22, 2005, and held in Scottsdale, Arizona. Sharp brought in the highest bid and was closely followed by Hulings’ works and a non-Western, but realist, G. Harvey oil on canvas. The auction brought in over $3 million in bids.