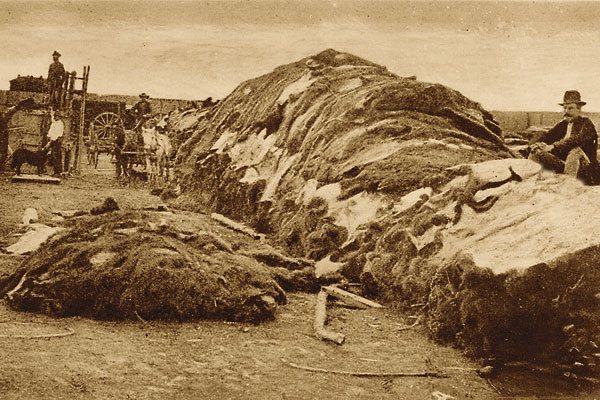 In the streets of a Kansas prairie town on an evening in mid-1872, a familiar pattern unfolded-a crowd gathered, somebody fired a gun and somebody responded in kind.

History is not clear on what happened. A tall black man called Tex (or Black Jack, or both) was standing in the street in front of a saloon, taking in the action, not hurting anybody or anything. Behind and above him, on top of the platform entrance to the watering hole, a gambler named Denver pulled his pistol and senselessly shot Tex in the head.

The killer got clean away. Years later, Denver said he shot Tex “just to see him kick.”

After the victim kicked off, the body lay in the street for a time. Finally, some folks took the corpse up to a nearby rise and buried Tex.

Tex was allegedly the first man killed in Dodge City who took up residence in Boot Hill. He wouldn’t be the last.

In fact, reports say that another 15 victims of violence were buried in the unofficial cemetery in the next 18 months alone. They were buried with their boots on—hence the name of the not-so-hallowed ground.

A lot of Old West towns had cemeteries called Boot Hill, but they stole the name from Dodge City. Boot Hill became a major figure in the history of the cattle town—a story told in one of the first books written about the city, Robert Wright’s Dodge City, the Cowboy Capital.  The classic may have finally met its match: William Shillingberg’s new book Dodge City: The Early Years, 1872-1886 (Arthur H. Clark Co.) is probably the most comprehensive look at the famous burg in its formative period.

The original Boot Hill was a slapdash affair. No neat rows of headstones marking the final resting place of the dearly departed—holes were dug in haphazard fashion all over the hill. Not all had coffins; several lacked markers. Nobody was quite sure just how many bodies were interred there, let alone the identities of the deceased.

But we know about a few of them.

Billy “Bully” Brooks was a hard case with a chip on his shoulder. The town fathers thought he was tough enough to deal with folks of a similar bent, so they appointed him a Dodge City deputy in 1872. The details are a bit fuzzy, but he may have killed five men in the course of duty—all of whom ended up in Boot Hill. Billy himself was planted near Caldwell. Seems he couldn’t run from his own nature, and by late 1873 he was riding the outlaw trail, stealing horses and causing mayhem. Vigilantes strung him up in the summer of ’74.

Jack Wagner was a drunken cowboy disarmed by Marshal Ed Masterson in the spring of 1878. But Wagner got another gun and mortally wounded the lawman. One of the Mastersons—either Ed or brother Bat—managed to shoot Wagner, who died the next day. Wagner went to Boot Hill. Ed Masterson was buried in another local cemetery.

By that time, Boot Hill was notorious across the country. It was also prime real estate, just begging for development. But builders were skittish about the place and refused to pony up the cash for it. Ford County decided to build the area’s first public school on the site; it opened in 1880.

Most of the bodies—about 50 of them, only one woman among them—were moved to other local graveyards. Reports state that some of the remains were not wearing their boots; the footwear had been placed like pillows under the heads of the dead.

A museum now stands on the site, a one-block re-creation of what Dodge City’s main street looked like back in the 1870s. It includes a small section of tombstones—not real ones, just representations of what once was.

Dodge’s Boot Hill is dead and long gone. But you can’t bury a great name and interesting legend, can you?